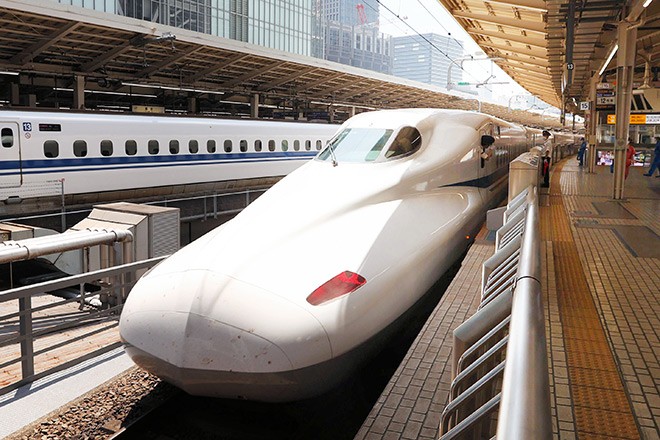 The Nozomi bullet train bound for Shin-Osaka Station is set to depart from the Tokaido Shinkansen Line platform at JR Tokyo Station on Aug. 7. (Nobuo Fujiwara)

Rail travel during the annual Bon holidays dropped to roughly a quarter of the volume from the year before due to the novel coronavirus pandemic, rail companies said.

The number of Shinkansen passengers and those taking limited express and other trains across the 46 main rail routes during the period plummeted to 3.54 million, or 24 percent of last year’s travel volume.

East Japan Railway Co. and five other Japan Railway companies on Aug. 18 announced the Bon summer holiday travel figures for the period between Aug. 7 and 17.

The figure is the lowest on record since 1990, when the record keeping started.

The number of passengers using the Tokaido Shinkansen Line during the period was 1.05 million, or 24 percent of last year’s total.

In one case among the outbound Shinkansen bullet trains, passengers made up only 5 percent of the full capacity of unreserved seats when the train departed from Tokyo Station. The platforms this year were not as crowded as in conventional years.

“The number of passengers dropped drastically due to the requests for people not to return to their hometowns and due to the cancellation of events like traditional festivals,” a JR East official said. “The recent spread of the virus also had an effect on train usage.”

An official of Central Japan Railway Co. said, “Even after the ‘Go To Travel’ campaign started, the trend of lower passenger numbers did not change at all.”