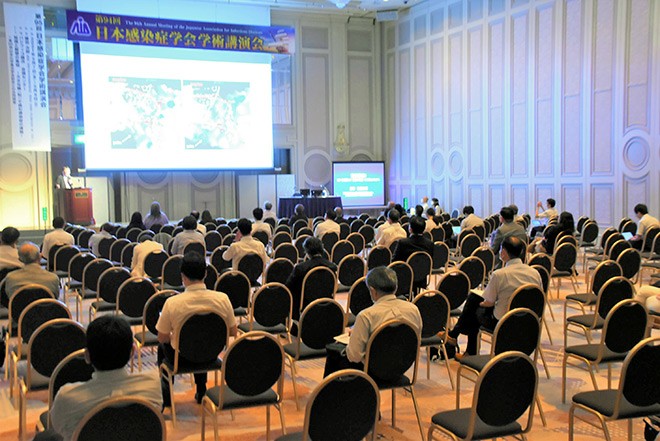 Participants sit spaced apart from one another to maintain social distancing at the Aug. 19 start of the Japanese Association for Infectious Diseases conference in Tokyo. (Kenta Noguchi)

Japan is now “in the midst of a second wave” of COVID-19, warned an infectious disease expert on Aug. 19, in stark contrast to the central government.

The government has long stopped short of labeling the surge in new cases since early July as such.

“We were able to somehow overcome ‘the first wave’ after the state of emergency was declared," said Kazuhiro Tateda, the head of the Japanese Association for Infectious Diseases, speaking at the annual conference that began in Tokyo on Aug. 19. "But we are now in the midst of a second wave.”

Tateda is a member of the central government’s expert panel on the pandemic and belongs to the health ministry's advisory panel monitoring infections.

The Asahi Shimbun has compiled the COVID-19 infection numbers announced by prefectural governments.

During the first wave over the two months from late March, there were about 15,000 cases. But in less than two months since late June, seen as the second wave, there have already been about 40,000 confirmed cases.

In prefectures where there has been a surge in new cases, such as Tokyo, Osaka, Aichi, Fukuoka and Okinawa, the daily average of new cases for the most recent week peaked in early August.

The figures slightly declined over the past week. One reason for the drop may be the lower number of people taking tests to confirm infections because of the Bon holiday season.

Asked by reporters about his use of the term "second wave," Tateda acknowledged that it was his personal opinion, but said that the large number of cases meant it was appropriate to describe the trend as a second wave.

“We should not get caught up in whether it is a first wave or second wave, but rather, the more important thing is to understand the situation and implement the measures that can be taken,” Tateda said.

Government officials have long hesitated from calling any surge a second wave.

At his news conference on July 30, Chief Cabinet Secretary Yoshihide Suga was asked if a second wave of infections had arrived.

“The situation is different from the time in April when the state of emergency declaration was issued,” Suga said.

At the Aug. 19 session of the Lower House Health, Labor and Welfare Committee, opposition lawmakers asked Katsunobu Kato, the health minister, about the second wave.

Kato said, “There is not necessarily a clear definition” for a second wave.

At his own news conference, Yasutoshi Nishimura, the state minister for economic revitalization who is the government’s point man for dealing with the pandemic, said, “There is no definition for ‘a second wave.’ Regardless of what it is called, there is no mistaking that we are within a large wave.”

Nishimura added that there was a need for caution about the increase in infections among those with a greater risk of developing severe symptoms.

According to figures released by the health ministry, there were 6,009 COVID-19 patients hospitalized around Japan as of Aug. 12. The figure exceeded the 5,627 patients of April 28 when data from the prefectural governments were first compiled into a national total.

The number of patients with severe symptoms has increased sharply from August, with the figure increasing by about 1.5-fold over the previous week in eight prefectures, including Okinawa and Osaka.

But nationwide there were 192 patients with severe symptoms, which was about half the figure for April 28.

Meanwhile, at another lecture given on Aug. 19 at the Japanese Association for Infectious Diseases conference, Satoshi Kutsuna, a doctor at the National Center for Global Health and Medicine, explained the treatment methods being used now on COVID-19 patients.

Speaking about medication to treat the virus, Kutsuna said data had been accumulated on the effectiveness of two drugs.

“My impression is that there are a greater number of cases in which severe symptoms have been prevented in comparison to the first wave when there were no effective drugs that could be used,” he said.

(This article was written by Kenta Noguchi, Tomohiro Yamamoto and Kohei Tomida.)