Abe returns to work, tries to dispel concerns about health 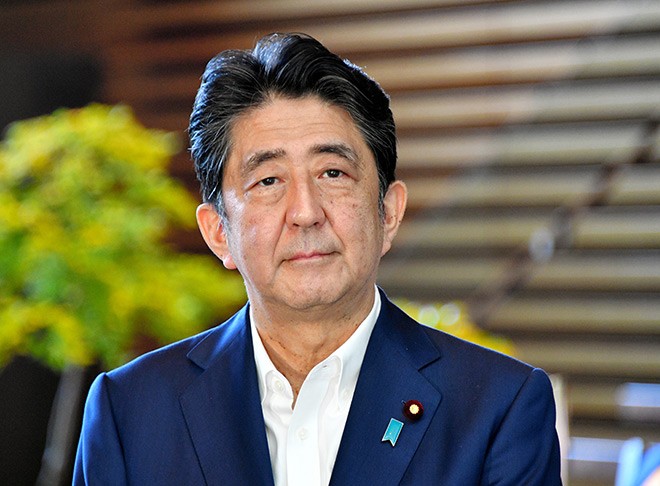 Prime Minister Shinzo Abe listens to a question from a reporter at the prime minister’s office on Aug. 19. (Kotaro Ebara)

Prime Minister Shinzo Abe brushed off questions about his health on Aug. 19 as he returned to work after a three-day summer holiday that included a seven-and-a-half-hour visit to a Tokyo hospital.

Abe arrived at the prime minister’s office shortly after 1:20 p.m. and met briefly with the media.

“I earlier received a medical examination to ensure that I can maintain good health,” he said, answering a reporter's question. “I’m returning to work and would like to do my best (in performing my duty).”

Other than his roughly 15-second comment, Abe did not respond to other questions. He then departed to carry on his duties, including attending a meeting to discuss measures against the COVID-19 pandemic.

Abe left the prime minister's office a little past 5:40 p.m. and went straight back to his private residence.

On Aug. 17, Abe stayed at Keio University Hospital in Tokyo for about seven and a half hours to undergo a one-day medical checkup. Hospital sources said it was an additional examination following a complete physical checkup in June.

His recent hospital visit was about one and a half hours longer than the one for his June checkup, fueling speculation that he might not be in good condition raised earlier by a report in a weekly Japanese magazine.

During a TV news program broadcast by BS Nippon Corp. on the evening of Aug. 18, Chief Cabinet Secretary Yoshihide Suga said he repeatedly urged Abe, who has been overseeing the government’s response to the pandemic, to take more days off.

Suga did not go into detail about Abe’s condition, but said his latest medical examination was nothing unusual because it had been scheduled and was not an emergency examination.

“Abe may have become tired because of his pre-existing condition and failed to maintain good health a little bit,” Koichi Hagiuda, education minister, told reporters after meeting with Abe at the prime minister’s office on Aug. 19. “He said he is fine.”

But even lawmakers of the ruling Liberal Democratic Party expressed puzzlement over the speculation concerning their party president’s health.

“If the health of a leader of the country becomes a matter of concern, it could further cast a shadow of uncertainty over the future course of the government’s pandemic response,” said a mid-ranking LDP lawmaker.

“If we keep saying ‘Abe is tired’ too much, the public might start thinking he should give up his post if he's tired that much,” a young LDP lawmaker said.

The Diet Affairs Committee chairmen of the main opposition Constitutional Democratic Party of Japan and other opposition parties also held a meeting at the Diet building on Aug. 19.

Jun Azumi, the Diet Affairs Committee chairman of the CDP, said they also discussed Abe’s condition and shared the view that he should explain in his own words whether he is fit enough to carry out his duties and respond to questions in the Diet.

“Abe needs to provide a proper explanation of all this, including his health condition, as many people have expressed concerns over the matter,” said Yukio Edano, the leader of the CDP, at a meeting of party executives the same day.