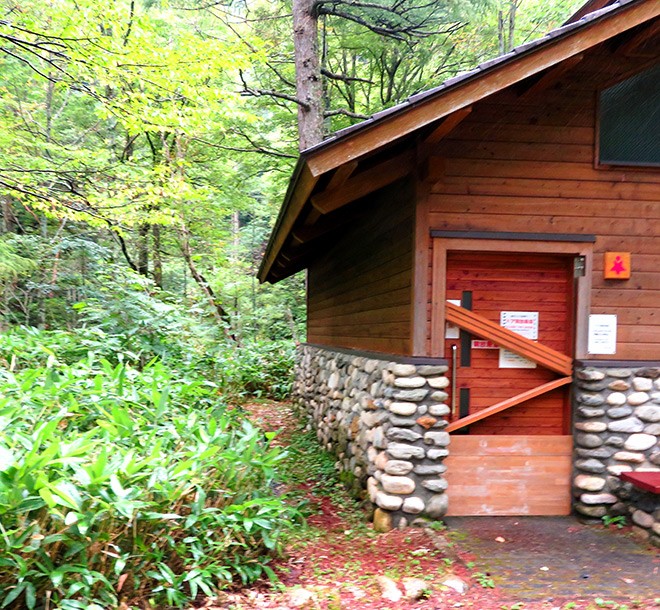 A pathway alongside the restroom facility where a female camper was dragged by a wild bear in Matsumoto, Nagano Prefecture (Yukio Kondo)

MATSUMOTO, Nagano Prefecture--Authorities here are warning visitors to be especially vigilant after a wild bear mauled a camper, tore her tent to shreds and gorged on her instant curry and other goodies.

The incident occurred in a mountain resort area of Kamikochi, gateway to the Northern Japan Alps, and followed a number of reports of wild bears roaming around camping sites and rummaging in garbage for food.

The woman, a Tokyo resident in her 50s, visited Kamikochi on Aug. 8 with the intention of staying two nights and going hiking.

She was joined by two friends at the Konashidaira camping site, a spot favored by tourists. Each of them pitched an individual-size tent for themselves.

The woman went to sleep around 6 p.m. that day. But around 11:30 p.m., she felt her tent being tugged strongly.

In pitch darkness, the movement suddenly became more frenzied, and the woman screamed, “Help me!”

At that moment, the attack subsided and the woman saw a large shadow rising up through the tent’s fabric.

A split second later, her tent was being ripped to pieces. The bear then made a throaty groan and grabbed the woman by her right knee.

“I was dragged with the tent. It was a powerful force,” she said.

The woman and the tent were dragged on a footpath for about 15 to 20 meters to the back of a restroom facility.

The woman managed to extricate herself from what was left of her tent, only to find darkness and silence.

“Should I move? Or, shouldn’t I?” she wondered.

After a while, she plucked up the courage to stand, and bending down made a beeline for the restroom and safety. She is pretty certain she glimpsed the head of the bear while fleeing.

In the restroom, she called for help. By then, about 15 minutes had passed since the attack.

She received first-aid treatment at a clinic in Kamikochi and was then taken to the Matsumoto City Hospital to have her lacerations stitched.

The bear's claws left her with injuries about 8 centimeters long.

Her friends recovered her backpack and clothes. All the food, including the instant curry, was gone.

“I bear no animosity toward the bear,” the woman said. “I rather feel sorry for the bear, actually.”

She said local people told her that the bear was probably having a hard time finding food as the area had experienced heavy downpours recently.

“They said that coexisting with wild bears is extremely difficult if the animals have developed a taste for food that humans eat,” the woman said.

Nihon Alps Kanko, which operates the camping site, said a bear began rummaging through trash boxes for leftover food since the evening of July 27.

The company set up traps and urged visitors to remain alert.

In the early hours of Aug. 8, a bear ransacked food inside a tent where a family of three was sleeping.

On Aug. 13, five days after the woman was attacked, a bear appeared at an accommodation facility located about 400 meters from the camping site.

A local resident used a blow dart to tranquilize the bear, which fled and was later found dead nearby.

The bear, a male, stood 1.4 meters tall and weighed between 150 and 170 kilograms. Local authorities believe it was about 15 years old and the one that attacked the Tokyo woman.

The camping site has shut down since the attack.

“We need to reflect on what happened and come up with measures to prevent another accident,” said a representative of the camping site.

The company will reopen the facility after cutting bamboo grass to ensure bears can easily be spotted from afar, among other measures.

The Environment Ministry’s management office in the Kamikochi area has urged hikers and visitors to “be more self-aware that they are in an unusual environment” and take precautions, such as using a bear bell.