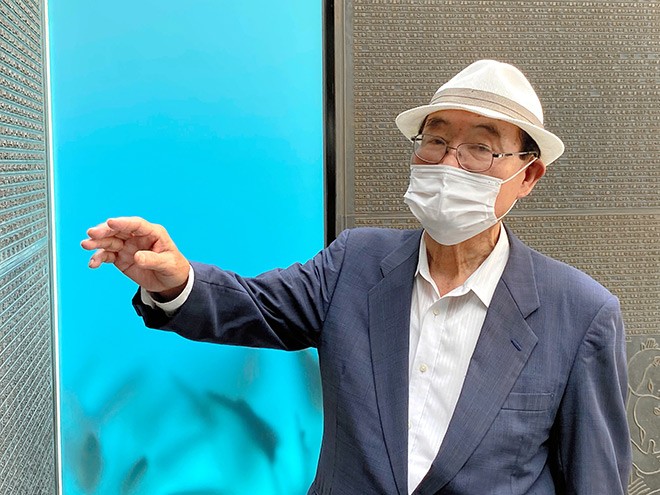 Kim Jong Mun poses in front of a copper monument plate, where names of Great Osaka Air Raid victims are engraved, at the Peace Osaka museum in Osaka. Kim requested that his grandfather’s Japanese name on the plate be replaced with his Korean name. (Hajimu Takeda)

OSAKA--A peace museum says it will honor the wishes of bereaved families of Korean victims of wartime air raids by listing their ethnic names instead of their Japanese names, if requested.

The Osaka International Peace Center, commonly known as Peace Osaka, keeps a register of those killed in the 50 or so rounds of air raids on Osaka between late 1944 and Aug. 14, 1945, the day before Japan’s surrender in World War II.

The museum’s decision came after Kim Jong Mun, a second-generation Korean resident in Japan, requested that his grandfather, who is listed under his Japanese name Tomihiko Kanatani, be remembered instead as Kim Yeo Jun, his Korean name.

Kim, 81, who lives in Osaka’s Kita Ward, said his grandfather, a native of Jeju Island in today’s South Korea, came to Osaka 13 years after Japan’s annexation of the Korean Peninsula in 1910 and raised a family here.

During the closing days of World War II, Kim and his parents evacuated to Miyazaki Prefecture, but his grandfather stayed in Osaka to keep his home. He died in the Third Great Osaka Air Raid of June 7, 1945. His Korean name is engraved on his grave marker.

Kim only discovered last year that his grandfather is listed under his Japanese name in Peace Osaka’s register. He learned about it when he was interviewed by members of a group studying about little-known Korean victims of the Osaka Air Raid.

Kim decided to enlist the group’s help to request his grandfather’s Japanese name be replaced with his Korean name.

“My grandfather, who was killed in an air raid, is still remembered by his Japanese name, which he adopted against his will,” Kim said he thought at the time. “It’s like his very existence has been covered up.”

The air raids on Osaka resulted in some 15,000 people dead or missing, according to Osaka prefectural police figures from October 1945.

The Osaka prefectural government commissioned Peace Osaka in 2002 to compile a list of the names of those killed in the air raids. The museum’s register covers 9,117 victims.

The names on the list, except for 48 kept anonymous by request, are publicly available in the museum’s building and are also engraved on a copper monument plate in its courtyard. Some bereaved family members visit the monument as a sort of grave marker.

Osaka prefectural police statistics from 1942 show some 410,000 Koreans lived in Osaka at the time. But fewer than 20 Koreans appear in Peace Osaka’s register under their ethnic names.

“Judging from the names, dozens of Koreans are included under their Japanese names,” said a member of a group studying wartime Korean fatalities.

Peace Osaka officials said the museum has no precedent for replacing an entry on the list with an ethnic name.

Hidehiko Yamaji, director of Peace Osaka, said entries on the list will be replaced with ethnic names on request when the monument is repaired next year to mark the 30th anniversary of the museum’s opening.

“I do understand how family members feel,” he said.

“Koreans were forced into adopting Japanese names under Japan’s colonial policy during World War II,” said Mizuno, author of the book “Soshi Kaimei” (Japanization of names). “They also found it tricky to use their real names for fear of facing discrimination in Japanese society.”

The Japanese government excluded air raid victims, including Japanese citizens, from being eligible for postwar compensation. War-bereaved associations and local governments independently compiled lists of those killed in air raids.

Peace Osaka’s register is based on a list put together by an Osaka-based association of those injured and bereaved by the war.

“We were working on our own dime, and we were too busy to find out about the real names of Korean victims,” said the head of the association, Takako Iga, 88.

Mizuno said those killed in air raids should be remembered in the memorial list by their real names since its purpose is to record the identities of war victims for posterity.

“Keeping records of Koreans and other people of former colonial origin by their ethnic names is primarily the responsibility of the central government (of Japan), which opened the war,” he said. “But the issue has been overlooked throughout the 75 postwar years.”