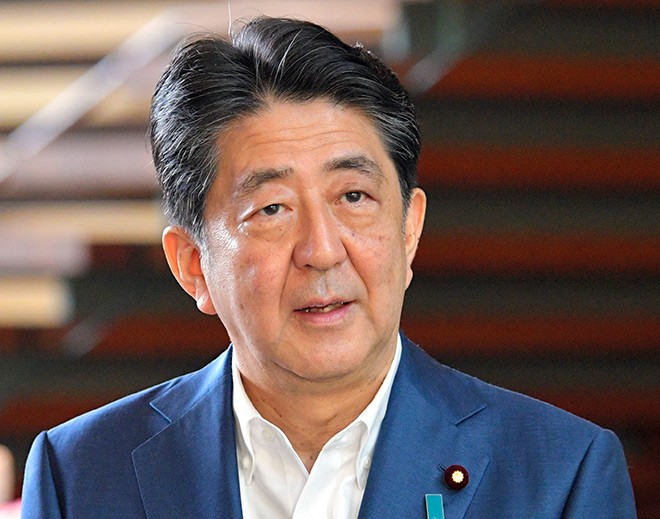 Prime Minister Shinzo Abe meets reporters at the prime minister's office on Aug. 24 after returning from a visit to a hospital. (Kotaro Ebara)

Shinzo Abe marked a record 2,799 straight days in office on Aug. 24 as the longest-serving prime minister in the nation's constitutional history amid mounting concerns about the state of his health.

The milestone in terms of a single run in the job surpasses the previous record set by his great-uncle, Eisaku Sato, who served as prime minister from 1964 to 1972. Sato's main achievement was regaining sovereignty of Okinawa in his last year.

With more than a year remaining in his term as president of the Liberal Democratic Party, Abe, 65, is on course to extend a record that is bound to stand for many years.

This is Abe's second stint as prime minister. In terms of total tenure, Abe in November 2019 renewed the record set by Taro Katsura, who held office for a total of 2,886 days in prewar years. Abe was the first to do so in 106 years.

On Aug. 24, Abe returned to a hospital in Tokyo following a visit he made on Aug. 17, fueling speculation he may not be in the best of health.

At the prime minister's building after his latest hospital visit, Abe tried to play down the significance of setting a record for consecutive days in office.

"In politics, what matters more is not how many days you were in office, but what you have accomplished," he told reporters. "I have toiled each day by dedicating all my strength to generate results and marked this after all those efforts."

Abe first took office in September 2006 at the age of 52, making him the nation's youngest postwar prime minister.

But he stepped down about a year later due in part to health reasons.

Abe won the presidency of the LDP in September 2012, when the party found itself in the rare position of being the main opposition party.

In December that year, Abe marched his party back to power by scoring a resounding victory over the Democratic Party of Japan in the Lower House election.

The LDP revised its party rules in 2017 to allow its president to assume the post for a third straight term for a total of nine years.

Previously, the LDP president could serve only a second term in a row for a total of six years.

On the national security front, he pushed for the Self-Defense Forces to expand their role overseas under the banner of making a proactive contribution to peace.

In 2015, a legislative package was enacted to allow Japan to exercise the right to collective self-defense, a landmark shift from the position held by previous administrations.

He also has staked his reputation on revising the nation's pacifist postwar Constitution to enshrine the legal standing of the SDF. Abe has yet to achieve this long-standing pet project, nor has he been able to resolve the thorny issue of abductions of Japanese nationals by North Korea in the 1970s and '80s that he had pledged was a priority issue.

Abe has been plagued by a series of political scandals that normally might have unseated an administration.

Abe and his wife, Akie, came under the public glare over a steep discount given by the government to a school operator and longtime acquaintance in Osaka Prefecture for the purchase of state-owned land.

He has also faced allegations of misusing taxpayer money by inviting large numbers of his supporters in his home constituency in Yamaguchi Prefecture and others to publicly funded annual cherry blossom viewing parties that he has hosted as prime minister.

Abe’s response to the new coronavirus pandemic has also drawn fire for being too little, too late. One much-derided policy initiative was his decision to distribute cloth face masks to every household at a time when stocks were running low on store shelves.

As a result, public approval ratings for his Cabinet have plummeted in recent months.