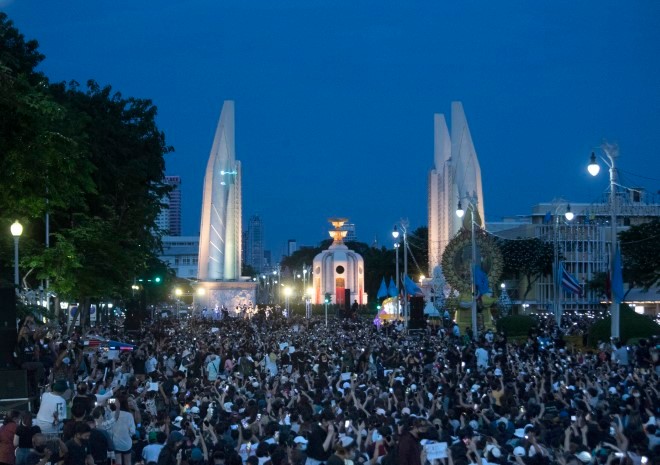 Pro-democracy students hold mobile phones with flashlights switched on at the front of Democracy Monument during a rally in Bangkok on Aug, 16. (AP Photo)

BANGKOK--Facebook on Monday blocked access within Thailand to a group with 1 million members that discusses the country’s king, after the Thai government threatened legal action over failure to take down content deemed defamatory to the monarchy.

The move comes amid near daily youth-led protests against the government led by the former military junta chief and unprecedented calls for reforms of the monarchy.

The “Royalist Marketplace” group was created in April by Pavin Chachavalpongpun, a self-exiled academic and critic of the monarchy.

On Monday night, the group’s page brought up a message: “Access to this group has been restricted within Thailand pursuant to a legal request from the Ministry of Digital Economy and Society.”

Pavin, who lives in Japan, said Facebook had bowed to the military-dominated government’s pressure.

“Our group is part of a democratization process, it is a space for freedom of expression,” Pavin told Reuters.

“By doing this, Facebook is cooperating with the authoritarian regime to obstruct democracy and cultivating authoritarianism in Thailand.”

Facebook declined to answer Reuters questions about blocking the group.

The company has said that when it receives complaints of posts violating local laws, it may restrict the availability of the content in the country.

Thailand has strict lese majeste laws that forbid defaming the king, with penalties of up to 15 years in prison.

Earlier this month, Thailand’s digital minister accused Facebook of not complying with requests to restrict content, including insults to the monarchy.

“The deadline is almost up and Facebook understands the context of Thai society, so they cooperate,” ministry spokesman Putchapong Nodthaisong told Reuters.

The ministry last week filed a separate cybercrime complaint against Pavin for creating the group.