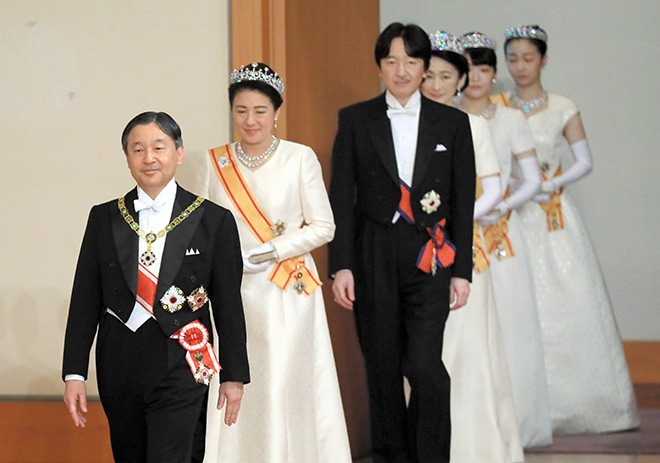 Emperor Naruhito, Empress Masako and other members of the imperial family attend a New Year ceremony at the Imperial Palace on Jan. 1, 2020. (Pool)

Appearing on an internet news program on Aug. 23, Kono sharply differentiated himself from the stance of the Abe administration, which remains hesitant about having an emperor from the maternal line.

Kono, who has made clear his aspirations to become prime minister, previously announced his intention to run in the election to pick a successor to Prime Minister Shinzo Abe as president of the ruling Liberal Democratic Party.

Kono periodically appears on the internet program, which takes questions from viewers beforehand. The topic for Aug. 23 concerned Kono’s views about allowing sons of the maternal line to become emperor.

He explained that a paternal line of emperors has continued for more than 1,000 years and said he had no qualms about continuing the practice if a male successor was available.

But he also cited the cases of Empress Masako and Crown Princess Kiko and expressed doubts about whether women in the future would want to marry into the imperial household.

“They would face incredible pressure to bear a son,” Kono said.

That, he suggested, posed a major challenge for continuing the practice of limiting succession to the paternal line.

With that as a precondition, Kono speculated about a future when there were no sons from the paternal line.

“One possibility would be having offspring of female imperial household members, beginning with Princess Aiko, to become emperor,” Kono said.

Kono has pointed out in the past the importance of ensuring the imperial line is maintained and not get caught up over whether a son was from the paternal or maternal line. In a blog post in October 2016, he called for reviewing the Imperial House Law to allow women and sons from the maternal line to become emperor.

Under his proposal of 2016, the rules of imperial succession would be changed to allow all children of the emperor, regardless of gender, to be eligible for succession depending on their order of birth.

There have been women emperors whose father was an emperor, but no male who only had a maternal connection to the imperial household has become emperor.

Article 1 of the Imperial House Law states that succession to the Chrysanthemum Throne should be “by a male offspring in the male line.”