Ian Easton: Crisis over Taiwan coming in next few years 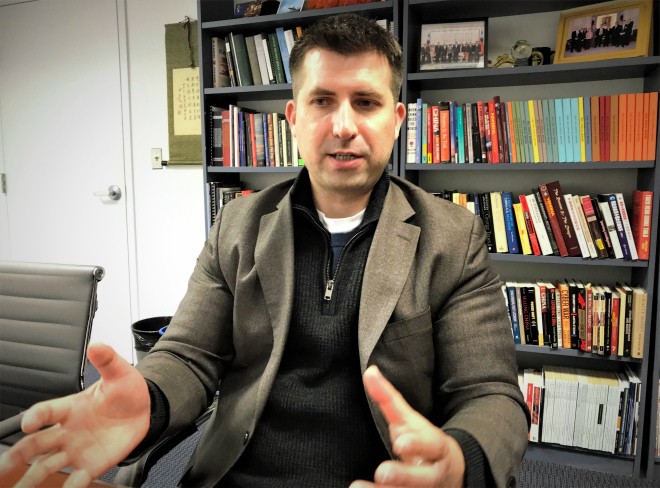 China’s recent imposition of strict national security laws over Hong Kong and the subsequent violent turmoil have been watched sternly by the eyes of the world.

That crackdown has raised the inevitable question: Is Taiwan next?

Ian Easton, who has written a book on the Taiwan Strait flashpoint, thinks that a crisis over Taiwan will occur in the next few years.

The novel coronavirus pandemic has further intensified the ongoing conflict between China and the United States--another element of destabilization felt by the international community.

In an interview with The Asahi Shimbun, Easton offered his views on the China-Taiwan relationship and its impact on the United States and Japan.

Easton currently serves as a senior director at the Project 2049 Institute, a Virginia-based think tank where he conducts research on defense and security issues involving the United States, China, Japan and Taiwan.

Easton holds a master’s degree in China Studies from National Chengchi University in Taiwan and was formerly a visiting fellow at the Japan Institute of International Affairs. He is the author of “The Chinese Invasion Threat: Taiwan’s Defense and American Strategy in Asia.”

Question: The novel coronavirus pandemic has escalated the conflict between the United States and China. The U.S. Navy has suspended the deployment of aircraft carriers after crew members were infected with the virus. In the meantime, China has intensified military activities around Taiwan. Do you think the situation surrounding Taiwan is becoming more tense?

Easton: If we look out into the future, the coronavirus might change things in a significant way. I think we should anticipate a crisis in the Taiwan Strait in the coming years.

The Chinese government tends to be externally aggressive when an internal crisis occurs, for example, when the leadership becomes dictatorial and unstable. In that case, Taiwan is going to be an easy target. For the Chinese Communist Party, "unification of the state"--conquering Taiwan--is an obsession and long-term strategic goal.

Q: Until now, China has called for a peaceful unification with Taiwan. But under the current situation, do you think China is more likely to go with another option, unification through military force?

A: China has a long-term strategy for taking over Taiwan. If China tries to do a full-scale invasion of Taiwan, their probability of success this year or next year is probably much less than 20 percent. However, China's military power is increasing rapidly. By 2025, you could reasonably say China has maybe a 50 percent chance of success. I'm afraid that over the next five to 10 years, East Asia is going to become increasingly destabilized.

Whatever prism you use to view it--political, economic, cultural, or military--the Taiwan Strait is structurally unstable.

Q: What actions do you think the Chinese military will possibly take against Taiwan?

A: It is still unlikely that China will launch a high-risk military attack. But certainly, a crisis in the Taiwan Strait is very possible in the near-term. For example, a naval blockade by the Chinese fleet could be considered. We could see long periods of high tension, or a series of intermittent crises that seem to come and go. And there always a possibility that Beijing will miscalculate and launch a massive armed attack. Washington could miscalculate too and do things that makes Taiwan a more vulnerable and inviting target.

Q: How can Japan and the United States fight against the Chinese military, which has augmented its forces over the years?

A: The U.S. Navy's 7th Fleet based in Yokosuka, Kanagawa Prefecture, has remained at about the same size in terms of ship numbers for the past 20 years, becoming relatively weaker as China's naval strength grows. China’s military buildup has been stunning and massive. The United States, until very recently, has ignored the threat and neglected the defense of vital allies like Japan and Taiwan, often leading from behind when it comes to deterring CCP aggression, expecting others to do more so Washington can fight in the Middle East and save money in Asia. That’s a huge mistake.

To prevent war with China, it is important to first identify and improve upon our many weaknesses, while exploiting those of the enemy. This in turn requires investing considerable resources into studying and understanding the enemy’s strategy and the military balance, net assessment style. After 20 years of fighting terrorists, the U.S. government faces an extremely steep learning curve.

We have to close the looming gap in intellectual and military power. We have to work closer together with our democratic allies so we are all operating as one team, and are prepared for the shared threats facing our critical infrastructures and societies. Our bases, ports and airfields could be devastated by cyberattacks and missile attacks.

So too could our social networks, telecommunications and power grids. We need to be able to hold China’s critical infrastructure at risk and demonstrate our willingness to respond to their envisioned attacks in kind. That’s what deterrence and war prevention is all about. But it may prove to be too late. The coming years are going to be dangerous ones.