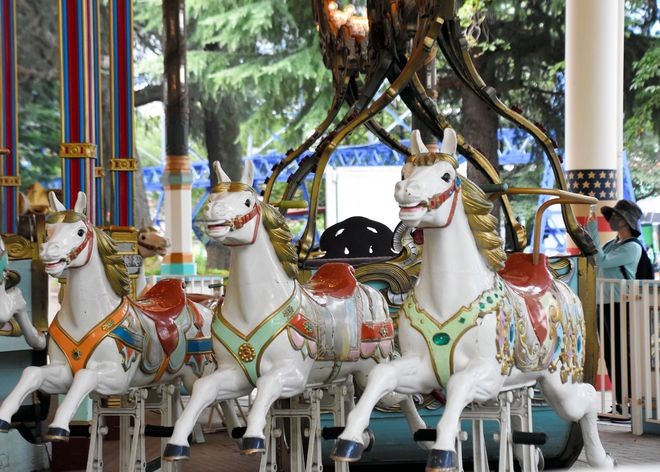 A visitor at the El Dorado carousel snaps a photograph before it starts up one morning at the Toshimaen amusement park in Tokyo's Nerima Ward. (Natsumi Nakai)

The crown jewel of the Toshimaen amusement park in central Tokyo, one of the world’s oldest merry-go-rounds, faces an uncertain fate following the Aug. 31 closure of the facility.

Visitors with a connection to the iconic attraction built in Germany in 1907 and called El Dorado flocked to the amusement park in Nerima Ward for what could be their last ride on it ever, although admission remained limited due to the coronavirus pandemic.

Hatsue Masuda, 89, showed up at Toshimaen "for the first time in 40 years" one August morning with her daughter and son, and joined the queue to ride it one last time.

Her first visit to the amusement park was during a school trip.

Masuda, who lives in the ward, kept going to the park even after she bore children. The park’s atmosphere changed with the times, but she said the carousel’s gorgeous look and majestic presence never faded, and always brought joy to her family.

Many saying goodbye to the park’s star attraction share fond memories of it across three or even four generations.

One married couple who showed up said they rode the carousel on a high school date 40 or so years ago. A parent said their daughter, now 38, chose El Dorado as the first theme park attraction to ride on in her childhood.

Toshimaen closed Aug. 31 after 94 years of operation. The area in and around the former site is to be used for "Nerima Joshi Koen" (Nerima castle ruins park), a disaster-prevention center, coupled with a Harry Potter theme park.

The beloved carousel entertained millions of visitors since it arrived in Japan after traveling through Europe and the United States.

Over many decades, it has been shuttered and reintroduced many times.

What eventually became the symbol of the Toshimaen park, El Dorado is believed to have been designed by mechanical engineer Hugo Haase. It is a superb example of classic styling, gorgeous gondolas, and hand-carved statues of horses and other animals--each of which has a different facial expression.

Initially, El Dorado offered rides across Europe. But as the shadow of World War 1 loomed, it moved to the United States. The merry-go-round found a new home at an amusement park in New York City.

But when that park shut due to recession, the attraction was taken apart and put into storage.

Years passed. El Dorado was eventually purchased by the Toshimaen operator in 1969 and shipped to Japan.

Toshimaen's record show that 26.3 million visitors have taken rides on El Dorado over the 49 years since it opened at the park in 1971.

‘PRIDE OF THE PARK’

When the merry-go-round first reached Japan from the United States, much of El Dorado's paint had peeled off and some components had not been properly assembled. Some were even damaged.

It did not come with detailed design drawings, so the park's engineers reassembled it through trial and error.

Some parts were lost, and park staff had a tough time tracking down replacement components.

Staffers were also forced to guess at its original color arrangement when it came to repainting the attraction.

It took two years to restore El Dorado before members of the public could take rides.

Toshimaen staff members were passionate about the restoration project and passed down their love for the carousel to others who cared for the equipment over generations.

Hiroshi Uchida, 65, head of the business management department of Toshimaen, said during his fifth year working at the amusement park in 1985, he experienced something he will never forget.

The U.S. amusement park operator that formerly owned El Dorado discovered the ride had started up again in Japan, and requested it be returned.

Surprised, Toshimaen explained through letters the difficulties it faced in restoring El Dorado and its popularity among Japanese children and refused to return it.

"El Dorado is not a mere attraction, but the pride of the park," Uchida said.

Uchida even held his marriage ceremony at El Dorado.

Makoto Sato, 60, who devoted himself to mechanical maintenance at the park for 36 years, described El Dorado as another version of himself.

Sato said the equipment, being antique, means it is difficult to find replacement parts. Minor problems need to be detected early to keep the equipment running.

Sato closely inspected the machine daily for loose components and tested it for abnormal sounds before the park opened.

"I have maintained El Dorado so it can operate forever," said Sato. "It is still operational."

After Toshimaen closes, attractions within the park are expected to be sold off or transferred to other affiliated facilities.

Though it is expected to be dismantled and kept in storage for the time being, Uchida and others believe the mechanical relic, which has survived through war and economic depression, will get a new lease on life someday--just like it did half a century ago.