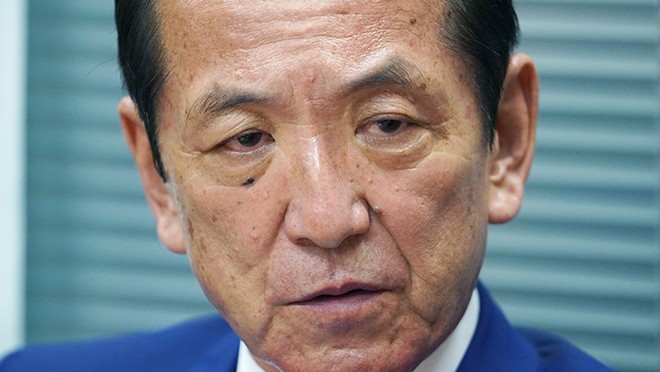 A veteran lawmaker involved in a major corruption scandal that rocked the political scene in the 1990s and who served prison time has risen to become a unifying voice for the opposition camp.

Kishiro Nakamura, 71, announced Aug. 25 he will join the Diet’s new political party, expected to be soon formed by members of the Democratic Party for the People (DPP) and the Constitutional Democratic Party of Japan (CDP) to fight the ruling coalition together.

Nakamura, a non-affiliated Lower House member, was once a major figure in the Liberal Democratic Party (LDP).

Nakamura was born into a political family in Ibaraki Prefecture. Both of his parents were Upper House lawmakers.

At the age of 27, Nakamura inherited his father’s political base and won a seat in the Lower House. Later, he joined the LDP and joined a political faction led by former Prime Minister Noboru Takeshita.

He was appointed construction minister, and many considered him to be prime minister material. The political heavyweight was elected 14 times, earning him the moniker of an election master as the figure included elections during his trial and after his release from prison.

But in 1994, he was arrested on suspicion of receiving a bribe for exertion of influence. It was part of a large-scale corruption scandal involving the construction industry and many powerful lawmakers, known as “zenekon oshoku” (general contractor bribery scandal).

Nakamura left the LDP but refused to resign from his Diet seat until 2003, when his prison sentence was finalized and he lost the seat.

In 2004, he was released on parole. The following year, he ran in the Lower House election and won as an independent candidate.

He has remained a non-affiliated politician since then. If he joins the new party, it will be the first time for Nakamura to belong to a major political party in 26 years.

Opposition lawmakers hope Nakamura’s experience and reputation as an “election master” will add strength to the new party.

In recent years, Nakamura has called for a united coalition of opposition forces to fight against the ruling coalition.

Nakamura on Aug. 25 held talks with the head of CDP, Yukio Edano, at the Diet.

Speaking to reporters, he said Edano asked him to join the new party during the meeting.

“It is a welcome development that a big group is being formed, and I am ready to work with everyone,” Nakamura told Edano.

Nakamura said he also told Edano the new party “needs to grow to be an opposition party that is able to absorb the voice of the public.”

He told Edano, “We shall work hard for the next election to make the number of conservatives and reformists equal.”

Yuichiro Tamaki, the head of DPP, has stated that he will not join the new party.

“We can’t call the new group a grown man’s opposition party if we give up when things go badly,” Nakamura said he told Edano. “All opposition members need to work together.”

Nakamura said Edano replied, “I will make an effort to keep working with Tamaki from now on.”

In recent local elections, Nakamura has taught freshmen lawmakers how to win, and served as a coordinator to unite opposition forces in local elections.

He has held meetings with leaders of opposition parties, including the Japanese Communist Party.

Tetsuro Fukuyama, secretary-general of the CDP, told reporters that he welcomed Nakamura’s decision and that the veteran’s presence will be a “big strength” to the fledgling party.

Some hope Nakamura’s decision will attract members of the CDP and DDP to the new party who have yet to decide whether to join.

“Nakamura’s presence is a symbol of the united opposition forces,” a CDP official said.

(This article was written by Maho Yoshikawa and Noboru Inoue.)