EDITORIAL: Visit the new Ainu museum for insight into their culture, history 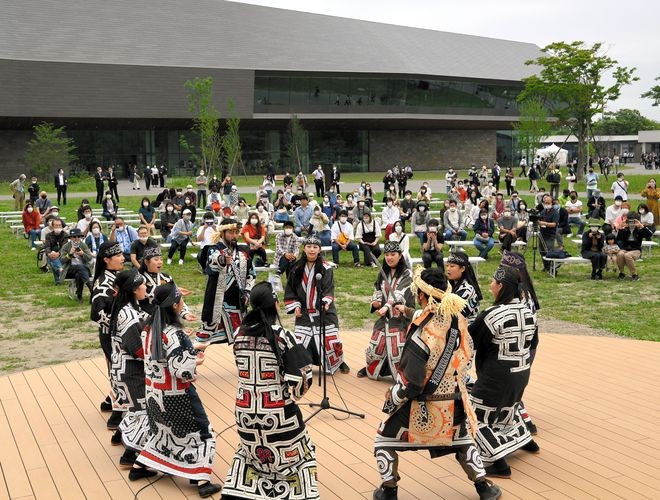 A traditional Ainu dance is performed on an outdoor stage to mark the opening of the National Ainu Museum and Park (Upopoy) in Shiraoi, Hokkaido, on July 12. (Asahi Shimbun file photo)

Upopoy, an Ainu word meaning “singing together in a large group,” is the nickname of a new facility themed on the culture and history of the Ainu, an indigenous people of northern parts of Japan, especially Hokkaido, and adjacent islands.

Formally named the National Ainu Museum and Park, Upopoy opened in July in Shiraoi, Hokkaido. The facility is designed to serve as the “national center” for restoring and promoting Ainu culture.

The centerpiece of the complex, the National Ainu Museum, uses the Ainu language, which is in danger of dying out, as the first language and offers a variety of materials that help visitors to learn about Ainu people’s lives, work and history from their own viewpoint.

In recent years, there has been a fresh wave of interest in the Ainu people, due partly to “Golden Kamuy,” a manga series about a man hunting for lumps of gold left by the Ainu people, and “Netsugen,” (heat source), a novel about Ainu residents of Karafuto (Sakhalin), which won the prestigious Naoki Prize. The new Ainu museum is receiving many reservations for visits by student groups during school excursions.

We hope many people will visit the facility while taking necessary precautions to prevent the spread of COVID-19 as well as its website to gain a better understanding about the indigenous people.

The Ainu were deprived of their own customs, language and lands for hunting and fishing under Japan’s policy of forced assimilation for the development of Hokkaido. A survey of some 13,000 Ainu residents in Hokkaido conducted in 2017 by the local government found that there remain disparities between the Ainu and Japanese populations.

The percentage of high school students who go on to college among the Ainu, for instance, was well below the national and Hokkaido averages.

But another survey has found that many Japanese do not have much knowledge about their fate in the past and present. Some Ainu believe Upopoy has been built as a “driver of tourism,” as tourism minister Kazuyoshi Akaba said after inspecting the facility, without tackling many issues and challenges concerning the Ainu.

They tend to be skeptical and wary about the museum and its exhibits.

But some Ainu people said they did not want the facility to focus on negative aspects of their history. In a section to learn about their traditional house, called “cise” (pronounced as chise), visitors find an explanation saying, “We (Ainu people) now live in cise similar to your (Japanese) houses and lead lives similar to your lives.”

This text has been added in response to a proposal by a young Ainu curator.

This signals Ainu people’s desire to start their efforts to make their culture more widely known by helping visitors to the museum know them as they really are.

Upopoy should work together with other facilities exhibiting Ainu-related materials in Hokkaido and museums both in and outside Japan to develop human resources necessary to help enhance and upgrade this nation’s policy toward not just the Ainu but ethnic minorities in general.

Politicians and bureaucrats have a heavy duty to promote the cause.

In a news conference in July, Koichi Hagiuda, the education minister, described the Ainu as “genjumin” (aborigines) and said there were “various differences in values” between them and Japanese who came to develop Hokkaido as he referred to Ainu people’s suffering in the past. But characterizing discrimination as “differences in values” is tantamount to revising history.

The government needs to step up its policy efforts to promote the rights and cultures of ethic minorities in line with the 2007 United Nations Declaration on the Rights of Indigenous Peoples and a related resolution adopted by the Diet in the following year.

Politics should help build a society where both the majority and minority members can sing together.