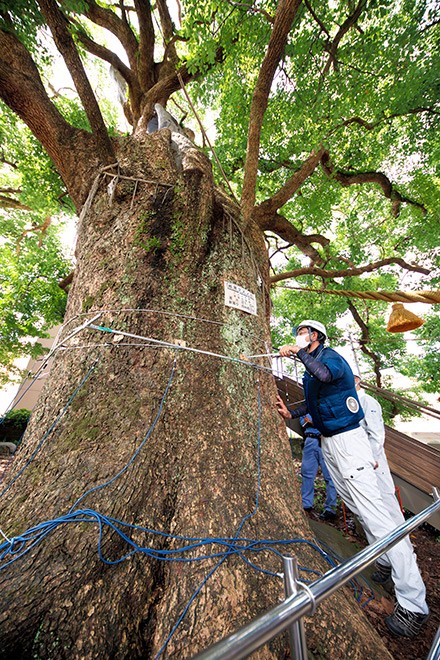 One of the trees that survived the 1945 U.S. atomic bombing of Nagasaki and became the subject of a song written by Masaharu Fukuyama. Arborists conduct an annual health checkup on the tree on July 31, which is funded by an endowment fund. (Naoki Ogawa)

NAGASAKI--The Nagasaki municipal government will start a peace promotion campaign in September inspired by the trees that survived the 1945 atomic bombing of the city, marking three-quarters of a century since the tragedy.

Singer Masaharu Fukuyama, who was born in the city, will lead the campaign's production. He is a second-generation hibakusha, or survivor of the atomic bombing.

The campaign takes its inspiration from the trees in Nagasaki that kept growing despite being damaged by the bomb's blast, and the intense meaning they had to survivors. When hibakusha saw how the trees survived, it lifted their spirits.

There are 46 trees remaining in the city that show traces of damage from the bomb.

“We hope the campaign will help people from a wide range of generations become interested in the atomic bombing,” said a city government official in charge of the campaign. “We are also counting on Fukuyama’s popularity in promoting the campaign.”

Fukuyama released a song in 2014 about the camphor trees at Sannojinja shrine that survived the bomb. The shrine is located about 800 meters from ground zero.

He also solicited donations at live music venues to raise money for treating trees damaged by the bomb. Some of the donations were used to set up a camphor tree fund that had about 50 million yen ($471,630) as of the end of July.

The city government said it is launching the campaign as part of its project to mark the 75th anniversary of the atomic bombing.

The city will launch a special website by the end of this fiscal year that uses videos and maps to show the trees that survived the bomb to the public.

Fukuyama will also share information about the trees on radio and social media. The campaign will be financed with money from the fund.