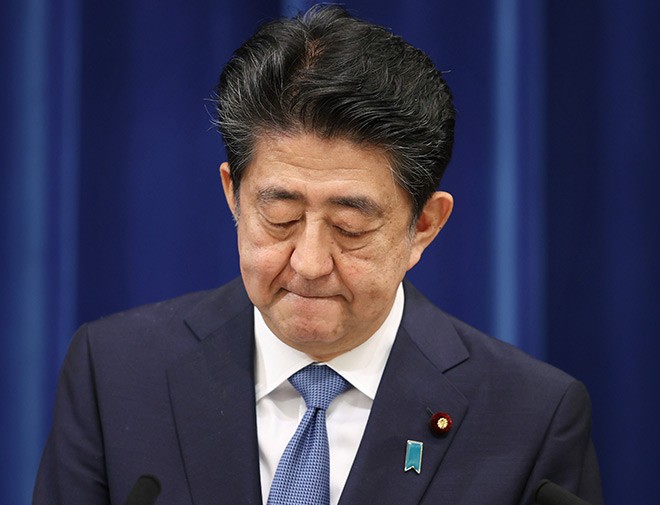 Prime Minister Shinzo Abe announces his resignation at a news conference in the prime minister's office on Aug. 28. (Nobuo Fujiwara)

Prime Minister Shinzo Abe said on Aug. 28 that he was resigning for health reasons because he could not continue if he was “no longer in a condition to confidently respond to the mandate given him by the public.”

Abe held a news conference to formally announce his intention to step down as well as explain what led him to that decision.

After explaining what a government task force had decided to do on Aug. 28 about dealing with the novel coronavirus pandemic, Abe said he wanted to speak about his personal health issues.

He said that during a periodic health exam in June, he was told by doctors that there were signs of a possible recurrence of the ulcerative colitis that led him to step down in 2007.

“I began experiencing physical problems from mid-July, and I was in a situation of wearing down my physical condition,” Abe said.

When he went to the Keio University Hospital in early August for a checkup, he was told that doctors had confirmed the ulcerative colitis had resurfaced.

Saying that the most important thing in politics is to produce results, Abe explained that he decided to resign because it would be intolerable to not produce results.

In addition, he said, he was concerned about making mistakes in judgment on important political matters because he was being treated for an illness or when his physical condition was not 100 percent.

Abe said he would remain as prime minister until his successor as president of the ruling Liberal Democratic Party was chosen.