TENNIS/ Osaka surprised by impact of her call for racial justice 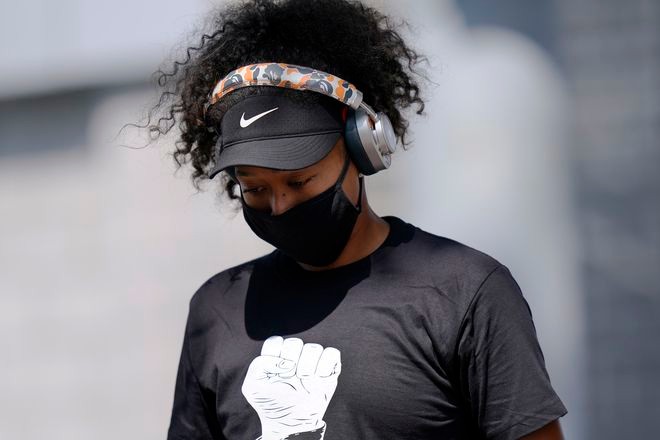 Naomi Osaka, of Japan, arrives for her match with Elise Mertens, of Belgium, wearing a Black Lives Matter shirt during the semifinals at the Western & Southern Open tennis tournament on Aug. 28 in New York. (AP Photo)

Naomi Osaka said on Friday she never thought her call for racial justice would garner the attention it did and she does not want to be called brave for taking a stand that led to a one-day stoppage at this week's U.S. Open tune-up event in New York.

The 22-year-old Japanese had initially said she would not play her Thursday semi-final in a bid to spark a conversation about racism following the police shooting of a Black man in Wisconsin last week.

Officials then suspended that day's matches and on Friday Osaka walked on the court for her semi-final wearing a T-shirt with a picture of a clenched fist and the words "Black Lives Matter" on the front.

Osaka said she thought the reaction to her stance was something more reserved for some of the game's bigger names like Roger Federer, Rafa Nadal, Novak Djokovic and Serena Williams.

"It's definitely a bit eye-opening but in an odd way, because I only previously thought, like, the Big Three and Serena would have that type of power," Osaka said after booking a spot in Saturday's Western & Southern Open final.

Osaka said she made a promise to herself during the sport's nearly five-month COVID-19 hiatus to not be shy in the future when it came to speaking her mind.

"During quarantine, the biggest thing I thought was, like, when I get out of this, I want to grow as a person and I don't want to have that many regrets going forward," said Osaka.

"I'm not sure if it's a light bulb or if there was any particular moment that sparked me to speak up, but I do feel like it's been building for a while."

After posting her announcement on Wednesday, Osaka said it was a bit frightening and that she had to turn off her phone because she gets anxious whenever people talk about her.

"Honestly, when people say courageous or anything, I don't really resonate that well with it. I just feel like -- not common sense, but this is what I am supposed to be doing in this moment."