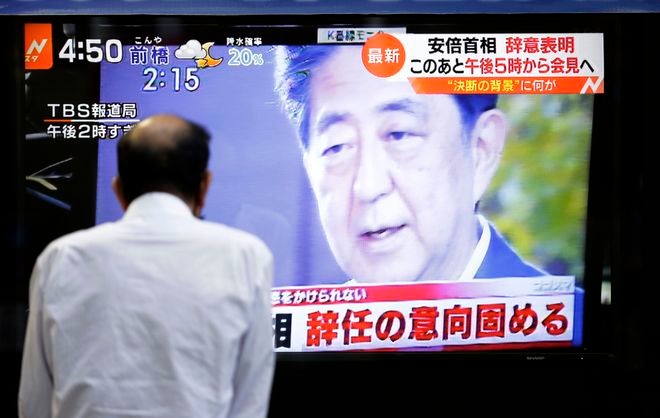 A man watches news on a monitor placed outside of a building in Tokyo on Aug. 28, showing a report of Japanese Prime Minister Shinzo Abe's intention to resign due to his declining health. (AP Photo)

World leaders wished Japanese Prime Minister Shinzo Abe a rapid recovery and praised his contributions to bilateral relations during his years as Japan's longest-serving leader. Abe announced Friday that he is stepping down because of a health problem. He is expected to stay on until a new governing party leader is elected and formally approved by the parliament.-

UNITED STATES: President Donald Trump said he was surprised by Abe's stepping down and paid his "highest respect to ... a very, a great friend of mine.” Speaking to reporters aboard Air Force One, Trump said, "We had a great relationship. And I just feel very bad for him. Because it must be very severe. Look, for him to leave -- he loves his country so much and for him to leave, I just can’t imagine what it is. He’s a great gentleman and so I’m just paying my highest respect.”

SOUTH KOREA: South Korean President Moon Jae-in's office said Abe dedicated many years to the development of bilateral relations and achieved “various meaningful accomplishments” as Japan's longest-serving prime minister. It said Seoul will continue to work with Tokyo’s next prime minister and Cabinet to promote “friendship and cooperation” between the countries. Relations between South Korea and Japan sank last year to their lowest point in decades as they feuded over trade issues, wartime history and military cooperation.

GERMANY: Longtime German Chancellor Angela Merkel, who worked with Abe during both of his spells in office, sent him a message saying he was “always a constructive and reliable partner in our common commitment to multilateralism, free trade, peaceful conflict resolution and rules-based order.” “For the future, I wish you a swift and complete recovery and personal well-being,” she wrote.

AUSTRALIA: Prime Minister Scott Morrison paid tribute to Shinzo Abe as “Australia’s true friend” and said that he would like to thank Abe for his enduring commitment to Australia-Japan relations over a long and successful career. Morrison said Australia and Japan shared a vision for an open, peaceful and prosperous Indo-Pacific region. “Prime Minister Abe is a man of integrity and wisdom,” Morrison said. “He has been the senior statesman in our region and across the globe, a strong promoter of open trade and an outstanding international diplomat for Japan.”

CHINA: Chinese foreign ministry spokesperson Zhao Lijian declined to comment directly on Abe’s health, saying it was Japan’s internal affair. However, he added that “China and Japan are close neighbors. We are willing to work with Japan to jointly press ahead with continuous improvement and development of China-Japan relations.”

BRITAIN: Foreign Secretary Dominic Raab paid tribute to “the great things” that Abe has achieved, and said he "leaves a strengthened U.K.-Japanese friendship, which we look forward to continuing in the years ahead. I wish him well for the future.”

PHILIPPINES: Philippine Foreign Secretary Teodoro Locsin Jr. described Abe as Japan’s “greatest postwar PM (prime minister)” in a tweet. He said Philippine President Rodrigo Duterte and Abe had a frank relationship. “Watching President Duterte and PM Abe talking was like watching two old friends, no holds barred, talking frankly and freely of the true lay of the land and what can and cannot be done,” Locsin said.

INTERNATIONAL OLYMPIC COMMITTEE: IOC President Thomas Bach credited Abe with the return of the Olympics to Japan after the 1964 Tokyo Olympics, 1972 Sapporo Winter Olympics and 1998 Nagano Winter Olympics. “All the Japanese athletes and the athletes of the entire world are very grateful to him,” Bach said. The Olympics were to be held in Tokyo this year, but they were postponed a year because of the coronavirus. John Coates of the Australian Olympic Committee and chair of the Tokyo 2020 Coordination Commission, said in a statement Saturday that Abe stepping down was “disappointing news from a professional and personal perspective. My interactions with him have always been very positive and constructive. I certainly hope he can successfully overcome the current challenges he faces away from political office. I very much look forward to PM Abe joining us for the Opening Ceremony on 23 July 2021 in the new National Stadium that he was instrumental in delivering. His support has been enormous.”