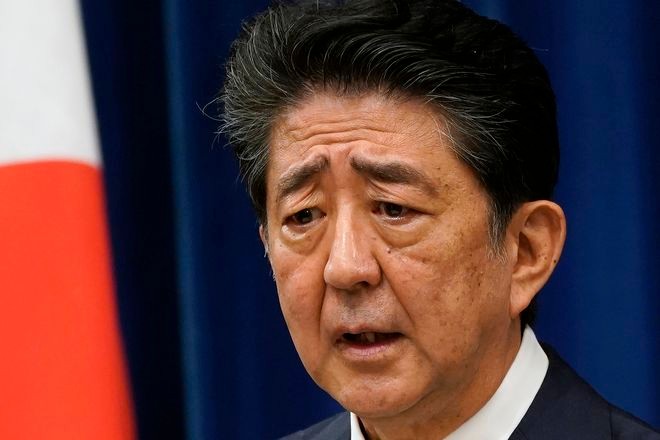 Prime Minister Shinzo Abe speaks during a press conference at the prime minister's office in Tokyo on Aug. 28. (Pool Photo via AP)

His departure should start the process of curing this nation’s democracy, which has been deeply damaged during his lengthy tenure.

Abe on Aug. 28 announced his resignation, saying he was “no longer in a condition to confidently respond to the mandate given him by the public” due to a relapse of ulcerative colitis, an inflammatory bowel disease that he developed as a teenager and which forced him to step down once before.

Instead of opting to continue in the job while undergoing treatment, Abe decided to leave office just as he had developed a comprehensive plan to grapple with the new coronavirus pandemic during the coming autumn and winter flu season.

Abe made a weighty decision based on his recognition of the huge responsibilities and challenges involved in the top job. We hope Abe will concentrate on convalescence for the time being to ensure his recovery.

The direct cause of Abe’s resignation is his chronic disease, which also ended his short first tenure. At that time, he came under fire for leaving after only a year in office.

In actual fact, the Abe-run government has been deadlocked for some time both politically and in terms of policy-making due to arrogance and complacency, a result of his long stay in power. The administration was clearly losing public support.

During this year’s ordinary Diet session, Abe was roundly criticized for using an annual cherry-blossom viewing party, hosted by the prime minister, to serve his personal interest.

A scandal over the dubious sale of state-owned land to Moritomo Gakuen, an Osaka-based school operator linked to Abe’s wife, Akie, came under renewed scrutiny in the aftermath of the suicide of a former Finance Ministry official who became embroiled in the scandal. His widow published notes left by her late husband concerning how he was effectively forced to rewrite official documents related to the land sale.

A massive vote-buying scandal involving Lower House lawmaker Katsuyuki Kawai, a former justice minister, and his wife, Anri, a rookie member of the Upper House, also damaged the reputation of the Abe administration, which was held partly responsible for their alleged irregularities because it provided unusually strong support to Anri’s possibly unlawful election campaign.

Abe was forced to abandon his attempt to revise the Public Prosecutors Office Law to extend the legal retirement ages of top public prosecutors after it met with strong public opposition and criticism that it would threaten the independence and neutrality of prosecutors.

The administration’s clumsy response to the COVID-19 pandemic further eroded public support for his leadership. The number of polymerase chain reaction (PCR) tests conducted daily was slow to increase despite Abe’s promise to make diagnostic tests for the new coronavirus widely available.

His initiative to distribute two cloth face masks to every household was clearly divorced from public opinion. He forged ahead with the “Go To Travel” campaign to rescue the embattled tourist industry despite growing concerns about a resurgence of new COVID-19 cases.

The administration’s actions to deal with the outbreak struck many Japanese as delayed and tactless responses to the public health crisis.

In an Asahi Shimbun survey last month, only 24 percent of the respondents agreed with the view that Abe was exercising effective leadership in preventing the spread of the virus, against 66 percent who said he was failing. The Abe Cabinet’s approval rating remained low at 33 percent.

These poll numbers indicated that the administration, which had been drawing political power from strong public support, had totally lost its momentum.

FAILED TO MAKE MOST OF STABLE POWER BASE

Abe’s second tenure as prime minister began in late 2012 after six consecutive short-lived governments, including those led by the Democratic Party of Japan, which all lasted for only about one year.

The Abe administration won broad public support by restoring stability in politics and ending opposition control of the Upper House.

But wage growth has remained weak, preventing many Japanese from feeling the benefits of his economic policy. In July, the Cabinet Office finally acknowledged  that the nation’s economic expansion, which started in December 2012 had ended in October 2018, entering a recessionary phase the following month.

Also battered by the effects of the pandemic, Japan’s healthy economic performance, the primary factor behind the Abe administration's solid public support, has faded.

But Abe failed to take full advantage of his strong political power base to tackle effectively tough policy challenges, such as the troubled social security system and the aging of the population as birthrates shrink.

Rather, he capitalized on the political dominance of the ruling alliance to push through a handful of controversial policy initiatives, including new national security legislation that opened the door to Japan’s involvement in collective self-defense, the state secrets protection law and the “anti-conspiracy” law. The public was bitterly divided over these legislative initiatives.

In the foreign and security policy arena, Abe’s prolonged rule has contributed, in a way, to strengthening his personal ties with some key foreign leaders.

But his signature diplomatic initiatives, staged with a vow to settle, once and for all, Japan’s unresolved post-World War II diplomatic issues, have fallen through.

His negotiations with Russian President Vladimir Putin to resolve the long-running Northern Territories dispute over a chain of islands off Hokkaido have reached an impasse, while his efforts to strike an agreement with North Korea over Pyongyang’s past abductions of Japanese citizens produced no progress.

The decision on how to elect the LDP’s next president, who will become the nation’s next prime minister by virtue of the party’s dominance of both houses of the Diet, has been left to LDP Secretary-General Toshihiro Nikai.

Under the LDP's rules, in a situation of urgency such as the current one, its president can be selected through a plenary session of LDP Diet members of both houses. The LDP leadership is reportedly inclined to adopt this method.

While there should be no gap in policy efforts to deal with the new coronavirus, Abe claims to have mapped out a plan for tackling the challenge for the coming months to avoid such a situation.

There is no strong case for adopting this approach to avoid a “political vacuum.” The LDP should hold a leadership election in which rank-and-file party members and associations across the nation also take part, along with LDP legislators. The process should be clearly visible to the public.

The LDP leadership poll should offer convincing and objective assessments of the Abe administration’s policy achievements and, equally important, the negative effects of its political approach and posturing.

The administration has created a deep division between “friends” and “foes” as it has shown a tendency to mount virulent attacks on opposition parties and their supporters while playing favorites with its political allies and supporters.

Because of the Cabinet’s solid control on personnel affairs involving top bureaucrats, the “sontaku” practice of acting to accommodate the assumed wishes and intentions of the powerful leader has become the norm in Japan’s officialdom.

It should not be forgotten that this bureaucratic illness led to the Finance Ministry’s falsifications of official documents, an unprecedented misconduct by bureaucrats that eroded the foundation of democracy.

What is worrisome is the fact that Abe’s prolonged political dominance killed the culture of lively policy debate within the LDP. In the LDP leadership race in 2018, which pitted Abe against former party Secretary-General Shigeru Ishiba, most factions flocked to the Abe camp as the prime minister was widely seen as a shoo-in.

The ruling party should not fail to scrutinize and evaluate with vigor the achievements and mistakes of the administration out of concerns about the political clout of Abe, who is supported by the largest LDP faction. The party should not allow its factions to focus on battles to form a majority without engaging in serious policy debate.

The process of selecting Abe’s successor will be a crucial test for the LDP, which badly needs to rebuild its credibility with the public.