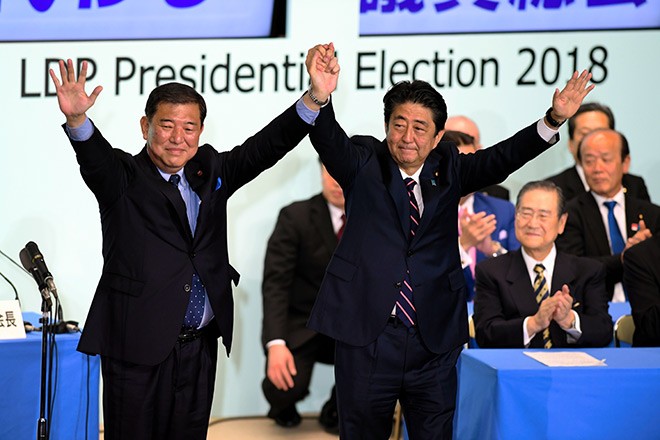 Within minutes of Shinzo Abe announcing his intention to resign as prime minister, top officials of his ruling Liberal Democratic Party convened an emergency meeting to decide on a successor.

It was decided to leave procedural matters to Secretary-General Toshihiro Nikai.

LDP executives were keen to ensure a successor is chosen swiftly to avoid a political vacuum. That would involve a vote of all party Diet members and prefectural branch officials in an LDP presidential election.

A formal decision on the method and timing of the election will be made at a General Council meeting set for Sept. 1.

LDP regulations have a provision for choosing a party president when one steps down midway through a term.

A successor can be chosen at a meeting of all LDP Diet members. In addition to the lawmakers, each prefectural branch is also allotted three votes. Under the LDP’s current strength in the Diet of 394, that election would be decided by a total of 535 eligible voters.

A party presidential election held when a term comes to an end also involves voting by rank and file members and supporters.

When Abe stepped down in 2007 during his first stint as prime minister for the same health reason, a meeting of LDP lawmakers and prefectural branch officials elected Yasuo Fukuda to succeed him as party president. When Fukuda also resigned a year later, a similar election chose Taro Aso as the successor president.

Aso didn't last long in the post, either, and now serves as deputy prime minister and finance minister.

In both cases, a new party president was chosen within two to three weeks.

However, there are growing calls for a more open vote involving all party members nationwide rather than the more simplified version.

Some of those considered as possible candidates to succeed Abe are already jockeying to run in the party presidential election.

Currently, there are three main names to watch.

Before Abe's announcement, Fumio Kishida, the LDP policy chief, gave a speech on Aug. 28 in which he stated his intention to run in the next presidential election.

Kishida sought the cooperation of his faction members at a meeting later that day as he tries to climb the next rung of the political ladder.

Shigeru Ishiba, a former defense minister and secretary-general who has twice run against Abe in the party presidential election, appeared on a TV news program on Aug. 28 and indicated his intention to throw his hat into the ring, possibly by Aug. 31.

Chief Cabinet Secretary Yoshihide Suga, who has served Abe for the entire seven years and eight months he has been prime minister, is also regarded as a likely candidate for the job.

While other younger LDP lawmakers also indicated their intention to run in the election, a major hurdle for them will be if they are able to gather the required signatures of 20 lawmakers to submit a viable candidacy.

Noda told reporters on Aug. 28 that she still has not abandoned her dream of becoming LDP president.

Motegi indicated he would discuss the matter with other members of the faction led by Wataru Takeshita.

Hakubun Shimomura, the party’s Election Strategy Committee chairman who belongs to the same LDP faction as Abe, also indicated he was interested in running.

Of primary concern to LDP lawmakers when deciding who to vote for in the party presidential election will be whether the person will be popular with the public.

The term of Lower House members ends in October 2021, so a major hurdle for the new LDP president, and therefore prime minister, will be on how the party fares in the Lower House election that must be held by then.

Public opinion surveys by media organizations show strong support among voters for Ishiba, perhaps because he frequently took Abe to task over policy matters. However, Ishiba does not appear to have wide support among LDP lawmakers.

There are also those in the LDP who would prefer delaying a Lower House election for as long as possible to allow Abe's successor to establish a firm foothold in the administration.

In that case, support could further rise for Suga, who maintains strong ties with many LDP executives.

Those close to Suga said he would run if support within the party gathers momentum.