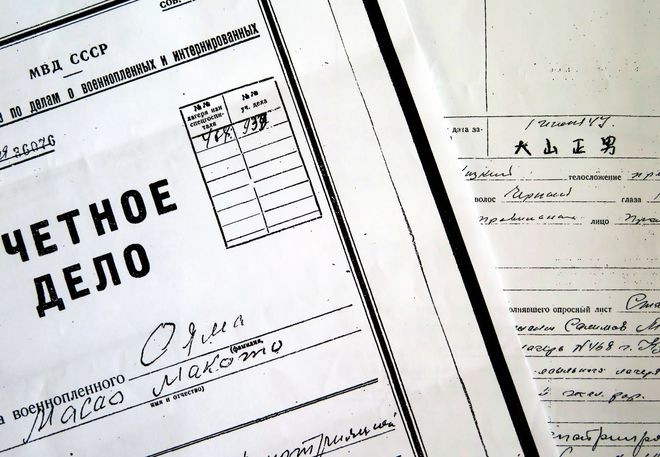 In a copy of a registry of Japanese war detainees obtained from Russia by the health ministry, there is an entry that lists "Masao Oyama," a Japanese from Ibaraki Prefecture, as Masao Go himself had declared. (Maki Okubo)

YOKOHAMA--When Taiwanese Masao Go went to apply for Japanese citizenship, he thought there would be no difficulty.

After all, he was married to a Japanese wife and had served in the Imperial Japanese Army during the Asia-Pacific War. He had nearly died in a Soviet internment camp after the war before returning to Japan in 1947.

But after being told repeatedly that his application might be denied, Go became determined to keep his nationality as Taiwanese for the rest of his life.

"My homeland is Taiwan, and my motherland is Japan. I think of myself as a Japanese born in Taiwan," Go said.

More than 75 years after the war ended, Go doesn't want Japan to forget the 30,000 Taiwanese who died fighting or working for the Imperial Japanese Army. He hopes there will be a memorial erected in their memory.

Go, 93, who now resides in Yokohama, was born in Taiwan under Japanese colonial rule. With his father being a local official who was pro-Japan, Go attended an elementary school for Japanese children before enrolling in a Tokyo junior high school as a foreign student in April 1941.

"I received an education designed for 'shokokumin' (young children of Imperial Japan serving the emperor), and I became a patriotic boy," Go recalled.

Go, who was fascinated by aviators, applied to become a special officer candidate at an Imperial Japanese Army school in spring 1944 at age 16. He enrolled in an air communication school in Mito, Ibaraki Prefecture, before being assigned to an air squadron based in the prefecture at the end of the year.

Go was attached to a unit consisting of a large bomber and a glider. Its mission was to send about 20 soldiers called "gliding infantrymen" in the glider towed by the bomber. The glider would be released from the tow craft at a point near an enemy base, making it possible for the troops to go out and attack after landing.

Immediately after Go was attached to the unit, he was ordered to change into summer clothes and instructed to send his personal items, hair and clipped fingernails to his family as mementos. His unit was scheduled to go on a mission on the southern front, but it was aborted after a ship carrying the soldiers that had departed before Go's unit sank.

The unit was transferred to the Sondok airport in the northern Korean Peninsula in May 1945. There was a plan for the unit to be dispatched to Okinawa Prefecture occupied by U.S. forces, but Japan was defeated before long.

Go was captured by Soviet soldiers and was taken to an internment camp in Kyzylorda in a semidesert region of the Central Asian country of Kazakhstan.

His life in detention was grueling. Go and other captives were forced to work on infrastructure projects, including building a canal and installing power-transmission cables, in the region where the temperature could drop to as low as minus 20 degrees during the winter. They only had a scant amount of rye bread and soup to eat.

Go took great pains to eat the soup at the bottom of the pot because it was thicker even if only slightly.

He ate anything that he could put into his mouth, including weeds that grew in a spot where donkeys defecated. Go suffered from malaria and roundworms. He used to weigh 60 kilograms, but lost weight on his near-starvation diet and was down to 40 kg.

"I don't want to recall bad memories," Go said. "I would have been dead if I had spent another year there. The landlady of my boarding house and a daughter of her relative (in Japan) had been my emotional support.

"The girl was six to seven years younger than me, and she once gave me a 'comfort bag' (gift packet for encouragement), which made me feel that there was someone who would cry for me. I thought I didn't want to die until I saw her again. It was a one-sided love I felt grateful for."

RETURNING HOME AS A FOREIGN NATIONAL

Go was discharged from military service at Maizuru Port in Kyoto Prefecture in July 1947.

At the time, he referred to himself as "Masao Oyama," and he was treated as a foreign national under the Alien Registration Ordinance, which took effect shortly before his return.

Go worked at a pachinko parlor while he studied at college. After graduation at age 26, he landed a job at a small credit association, Yokohama Kagin. He served as head director before his retirement.

Go felt like his past was being denied although he received education, fought for the nation in the war and was detained as a "Japanese," so he decided to remain a Taiwanese.

Go served as head of parishioners for Iseyama Kotaijingu shrine in Yokohama for two terms, or six years in total, until he was 90. He was the first non-Japanese to assume the role at the guardian shrine of Yokohama, which dates back 150 years.

However, there is an issue that stands in the way of non-Japanese nationals.

In 2010, a special measures law for postwar forced internees, aka the "Siberia Special Measures Law," was enacted to provide cash handouts to former Japanese soldiers who were detained in Siberia and Mongolia to engage in forced labor. But a nationality clause is included to exclude foreign nationals.

"Even Japanese who were detained for two years can receive only 250,000 yen ($2,370). The fact that I can't even receive it is discriminatory, but it is too late to start a movement," Go said. "But I have one thing in mind: I wonder how many people know that about 30,000 Taiwanese people died in that war. I'm not sure whether Japanese want to console the souls of Taiwanese people who fought as Japanese soldiers.

"I hope a cenotaph for the Taiwanese war dead will be erected in a place where everyone can visit. It troubles me if the deaths of 30,000 people are forgotten."

For the Asia-Pacific War, about 210,000 people were mobilized from Taiwan, which was under Japan's colonial rule at the time, to fight as military and civilian personnel for the Japanese military. Of these, about 30,000 died.

From the Korean Peninsula, about 240,000 people served as military and civilian personnel. Of these, about 20,000 people lost their lives.

The central government started providing compensation to disabled veterans and civilian workers, as well as war-bereaved families, in 1952, before reviving military pensions in the following year.

But both measures only covered those with Japanese nationality.

Japan and South Korea reached a bilateral agreement that settled all war reparations issues when the two countries normalized diplomatic ties in 1965.

As for Taiwanese living in Taiwan, a lawmaker-initiated legislation paved the way for a compensation system in 1987 to pay 2 million yen to severely disabled veterans and war-bereaved families.

Meanwhile, those from the Korean Peninsula and Taiwan living in Japan were excluded from all the compensation measures, prompting them to file a series of lawsuits in the 1990s. In 2000, a special law was enacted to provide a lump sum to severely disabled veterans and war-bereaved families.