Courageous Ikee wins in 1st race back after fight against leukemia 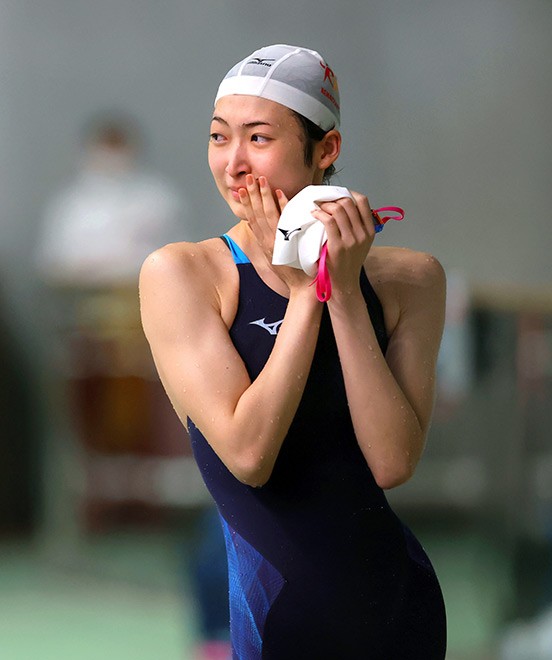 After finishing her 50-meter freestyle race, Rikako Ikee wipes away her tears in a meet held at the Tokyo Tatsumi International Swimming Center on Aug. 29. (Pool)

Slowest in the pool at the start, Japanese swimming star Rikako Ikee quickly found her championship form in a stirring comeback that brought tears to her eyes and to a proud nation.

Ikee, 20, who was diagnosed with leukemia last year, came from behind to win her 50-meter freestyle race in Tokyo on Aug. 29, her first competition after being released from the hospital in December following 10 months of treatment.

She was overwhelmed by emotion after placing first in her heat in the meet held at the Tokyo Tatsumi International Swimming Center.

“I never expected to finish first in the group,” Ikee said. “I am moved by the fact that I could swim again in a competition. This is the first chapter of my second swimming career. I made a good restart.”

She qualified for the intercollegiate championships in October, posting a time of 26.32 seconds, 2.11 seconds behind her own national record. Ikee, who finished fifth overall, needed a time of 26.86 seconds or better.

It was Ikee’s first race in a year and seven months. She revealed that she had leukemia in February last year in a stunning post on her Twitter account.

In March, she returned to the pool after a 406-day absence and resumed training in May with her sights set on competing in the 2024 Paris Olympics.

Three months later, she took her first competitive strokes toward that goal.

Ikee said she was extremely nervous right before the race as she was worried that her goggles might come off when she dove into the water.

Although slowest to respond to the starting horn, she easily caught her competitors with her long, fluid strokes and pulled ahead at the end.

Some had voiced concerns over her return to a competitive race.
But her coach, Isamu Nishizaki, was confident that Ikee is in good shape.

She kept clocking a better time in each training even though her sessions were limited to four times a week, according to Nishizaki.

“I was surprised to see her swim this well after resuming her training” only recently, said Nishizaki. “She is blessed with natural talent, such as her strokes and the way she floats.”
In last year’s intercollegiate championships, Ikee, as a freshman at Nihon University, was in the stands, rooting for her teammates. She was temporarily released from the hospital where she was being treated at the time.

This year, she is planning to be competing alongside them.

“I worked hard over the past year, believing that I will compete in the championships,” she said. “I want to show people that I can fulfill my dream.”