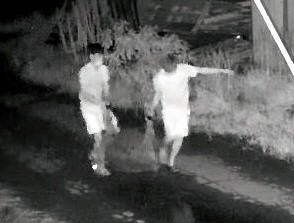 Livestock rustlers have been hitting farms hard in the northern Kanto region in the dead of night, making off with prized calves in Tochigi Prefecture and 670 piglets in Gunma Prefecture.

Gunma and Tochigi prefectural police are investigating the cases as theft and searching for the culprits.

In a farm in Tochigi Prefecture, which lost six calves, a security camera captured the moments when they were carried off by thieves while upside down late at night.

At around 10:30 p.m. on Aug. 22, a car pulled alongside a cattle shed at a livestock farm in the countryside of Ashikaga, Tochigi Prefecture.

Three individuals wearing shorts and face masks exited the car in the pitch darkness. While one acted as a lookout, the other two picked out three calves from the shed and carried them upside down one by one and loaded them into the vehicle.

A security camera installed at the shed filmed the entire process, which took just 30 minutes.

“I feel like I lost my own children,” said Kazuhiro Tsuruta, 57, president of Tsuruta farming, which owns the shed. “I regret the loss and feel resentment toward the thieves.”

His farm has run a cattle breeding business for half a century since the previous president. After two calves were stolen in June for the first time, he installed the security camera at the shed.

The stolen calves, Japanese black-haired “kuroge wagyu” cattle, each weighed about 50 kilograms and were about 4 weeks old.

The three individuals appeared to be adept at handling cattle. They were believed to have rendered the calves unconscious to prevent them from running away and bound their forelegs and hind legs with tape.

The livestock farming area in Ashikaga is home to many cattle sheds with a total of some 2,000 heads of cattle kept there. Pedestrians are rarely seen around the sheds, and anyone can easily enter the pens since they are built to ensure proper ventilation.

Staff are working there during the day, but practically no one is around at night.

Calves were apparently targeted in such a quiet environment because they are easy to carry. But the stolen calves cannot be traded through official distribution channels since they have identification numbers tagged to their ears, said Tsuruta.

According to the Ashikaga police department, six heads of cattle, including those kept at other cattle sheds, were stolen in the livestock farming area between June and August and the amount of losses totals 2.75 million yen ($26,000).

In Gunma Prefecture, some 670 swine, mainly piglets, have been stolen since early July at seven locations in Maebashi, Isesaki, Ota and Tatebayashi cities in the prefecture. The losses are estimated at 24 million yen in total.

Gunma Prefecture has the fourth highest number of pigs being raised in the nation with about 630,000 on hand.

“We’ve never had such a large number of livestock stolen,” said a senior official of the Gunma prefectural police.

According to Maebashi’s agricultural cooperative association (JA Maebashi), about 170 pigs were stolen at four pig farms to the south of Mount Akagiyama, in the countryside. In all the cases, about 50-day-old pigs weighing 20 to 30 kg were targeted at a simple-structure farms surrounded by roughly 60-centimeter walls.

“Farmers are really shocked at the loss since they have taken great care of their pigs,” said a JA Maebashi staff.

At another pig farm in the city, 400 pigs, including a 140-day-old porker that weighed 120 kg and was about to be shipped, were stolen.

Pigs grunt loudly when they sense danger, and it is difficult to carry them upside down because of their short legs. Police are calling on farmers to remain vigilant as thieves are likely carrying knives, since blood from piglets was spotted at some of the crime scenes.

However, stolen pigs cannot be easily traded through official distribution channels. One farmer speculated that there is a network of other sales channels, including black-market channels used by multiple groups, on social media.

Another farmer said thieves may be consuming the pigs they stole instead of selling them, but Yasuyuki Okabe, 64, president of the prefecture’s pig farming association, cast doubt over the theory.

“Unlike pigs shipped for household consumption, little ones do not have much meat to eat,” Okabe said.

Pig farmers have taken thorough hygiene control measures, such as strictly restricting access to their farms, to prevent a spread of classical swine fever and other infectious diseases among their droves.

“I’m scared because a pig farming area will suffer catastrophic damage if thieves bring in viruses to farms,” said a male pig farmer in Maebashi. “I can never forgive them.”