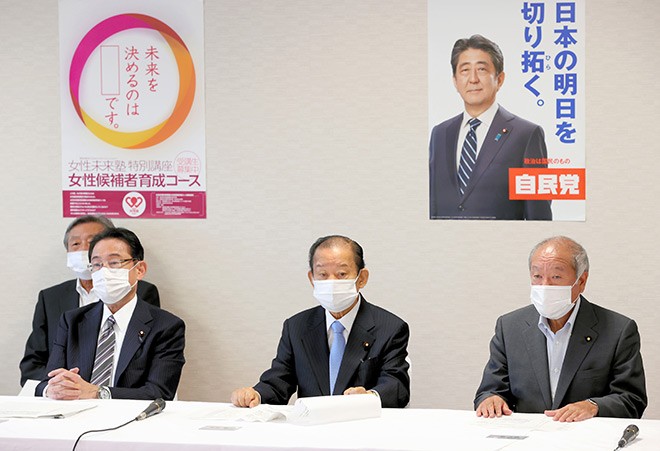 The ruling Liberal Democratic Party on Sept. 1 bent to internal demands and will allow rank-and-file members to have a voice in the party’s presidential election to replace Prime Minister Shinzo Abe.

Despite the decision, Chief Cabinet Secretary Yoshihide Suga, who has secured support from major LDP factions, is still considered the front-runner in the election expected in mid-September.

The LDP’s General Council had decided on a simplified version of a party presidential election that would only allow party Diet members and representatives from the 47 prefectural branches to vote.

But after more than 100 lawmakers and a number of prefectural branches objected to the format, the LDP decided to ask those branches to hold primary elections as a way of choosing how the three votes for each branch are cast.

The election management committee for the party presidential election will hold a meeting on Sept. 2 to hammer out the details of the format.

At an earlier news conference, LDP Secretary-General Toshihiro Nikai stated the party’s intention to hold a simplified election that would exclude rank-and-file members.

“We cannot have a political vacuum at a time when the general public is greatly worried about a further spread of COVID-19,” Nikai said. “Aggressive measures are needed to deal with the pandemic”

LDP presidential elections normally allow party members and support groups from around the nation to vote. But LDP executives have used the need for dealing with the novel coronavirus pandemic as a reason for not having party members cast ballots this time.

The election winner is essentially assured of being named prime minister in the Diet. Given the gravity of the poll, objections were raised that the voting method could largely determine the outcome of the election.

Some LDP executives, including Tomomi Inada, the executive acting secretary-general, and Hakubun Shimomura, the party Election Strategy Committee chairman, had proposed a poll that would allow for participation by rank-and-file members.

Many of the major LDP factions have expressed support for Suga, so having an election involving only lawmakers and representatives of prefectural branches would have placed him in an extremely advantageous position.

Although Ishiba has gained the highest support ratings among various public opinion surveys, his support among fellow lawmakers is not as strong.

The move for a simplified party presidential election was seen as a way to ensure that Ishiba, a vocal critic of the Abe administration, would not win.

At his Sept. 1 news conference, Suga was asked about the growing calls to allow rank-and-file party members to vote.

He avoided a clear response, saying only, “This is not the proper forum for me to state my view as an individual Diet member.”