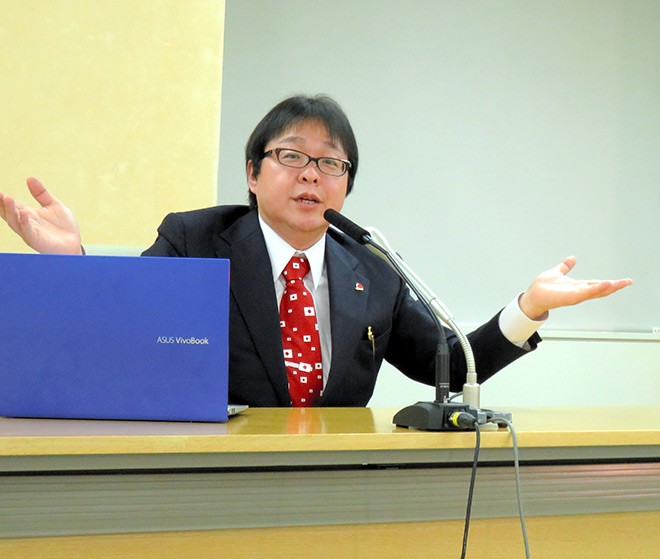 Makoto Sakurai holds a news conference in June to announce he is running in the Tokyo gubernatorial election. (Asahi Shimbun file photo)

A far-right activist who repeatedly made hate speech comments and called for the slaughter of ethnic Koreans in Japan is preparing to run for a seat in the Diet.

The Japan First Party, headed by Makoto Sakurai, 48, announced that not only would its leader run in the Tokyo No. 14 district in the next Lower House election, but it would also field four candidates in the Tokyo bloc of the proportional representation constituency.

In a Sept. 1 internet broadcast, Sakurai also had some harsh words for the ruling Liberal Democratic Party.

“A Lower House election may be held in October or early next year. In either case, the LDP will lose,” he said. “The general public also bears responsibility for choosing such a group of idiots.”

Sakurai has already made a foray into politics, garnering about 179,000 votes in the July Tokyo gubernatorial election in which he finished fifth. Although that tally was only 2.9 percent of the total ballots cast, it was an improvement of 64,000 votes from four years earlier.

He plans to ride that momentum to the national level. He is also apparently hoping the growing economic disparity in Japan could lead to a similar trend seen overseas where far-right xenophobic political parties have gained strength by espousing anti-immigrant, anti-foreigner arguments.

Sakurai is most known for his actions when he was chairman of Zainichi Tokken wo Yurusanai Shimin no Kai (Group of citizens that do not tolerate privileges for ethnic Korean residents in Japan).

He often took to the streets and shouted slogans, such as, “Batter and kill Koreans who are anti-Japan” or “Burn all South Koreans living in Japan.”

Some of Sakurai’s past comments have been ruled as hate speech by courts.

In August, the Fukuoka Legal Affairs Bureau ruled that comments Sakurai made in March 2019 in front of a school in Kyushu for ethnic Korean children constituted hate speech.

During the Tokyo gubernatorial election, Sakurai repeated his call for the immediate end to public welfare assistance to foreigners. But he made other proposals, such as implementing measures to deal with the novel coronavirus pandemic and ending local resident and property taxes for Tokyo residents.

A 48-year-old company executive living in Hachioji in western Tokyo said she voted for Sakurai because of his “Japan first” argument.

“During an age of slow economic growth, Japan does not have much fiscal leeway,” she said. “It is only natural that support for Japanese takes precedence over welfare measures for foreigners.”

Some LDP lawmakers believe they are partly to blame for the surprising showing by Sakurai. The Tokyo chapter of the LDP did not come out and support any specific candidate, leaving that decision up to each voter.

Sakurai is showing a softer side on programs streamed over the internet. On one broadcast on Aug. 24, he appeared in a short-sleeve shirt in speaking to his supporters.

But he has not weakened his criticism of established political parties, especially the LDP.
He has blasted the Abe administration over its handling of the COVID-19 pandemic.

An analysis of Twitter during the course of the Tokyo gubernatorial election found that “Makoto Sakurai” was mentioned far more frequently than Tokyo Governor “Yuriko Koike” and “Taro Yamamoto,” leader of Reiwa Shinsengumi, which won two seats in last year’s Upper House election.

However, Fujio Toriumi, an associate professor of systems innovation at the University of Tokyo, said the large showing of interest in Sakurai on social media came from a cluster of like-minded users who retweeted messages among themselves.

“There is likely a gap between the high enthusiasm that appears over the internet and the general trend in society,” Toriumi said.
Other experts said Sakurai’s economic policy arguments could generate interest in society.

In an August video streamed on the internet, Sakurai called for abolishing the consumption tax to ease the economic burden on the public.

“We are the only party that is capable of fundamentally changing Japan,” he said in the video.

Ken Endo, dean of the Graduate School of Public Policy at Hokkaido University, noted that far-right parties in Europe are trying to broaden their appeal with calls for helping the economically disadvantaged.

“A gap has emerged in society with greater economic disparity and that has led to greater distrust of established parties, the elites and the media,” Endo said. “With the advancing of globalization, more people are also becoming worried about their own identity. That serves as the seed of support for far-right parties.

“A similar trend is arising in Japan.”

Takahiro Akedo, a specially appointed lecturer at Hosei University who is knowledgeable about hate speech issues, said as long as Sakurai runs in elections he will have to face responsibility for his past comments.

“Voters should make decisions while also remembering that he repeatedly made hate speech comments,” Akedo said.

(This article was written by Yasukazu Akada, Chihiro Ara and Naoki Matsuyama.)