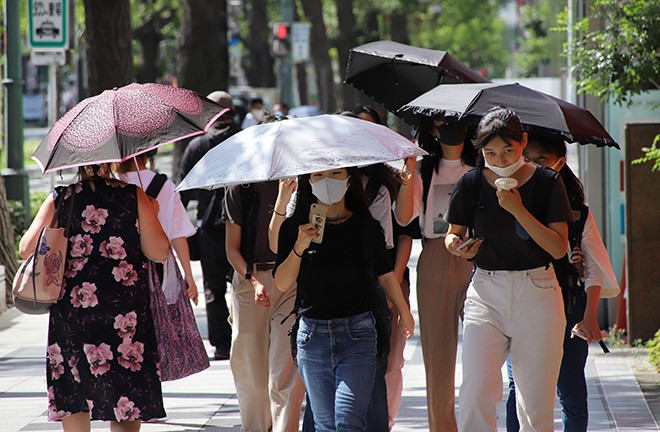 Pedestrians in Osaka put up parasols due to the intense heat on Aug. 29. (Toyokazu Kosugi)

Eastern Japan recorded its highest average temperature for the month of August since 1946 when records were first kept, according to the Japan Meteorological Agency.

The average temperature for the Kanto-Koshin, Hokuriku and Tokai regions in Eastern Japan in August was 2.1 degrees higher than in an average year, the JMA said Sept. 1.

The average for the Kinki, Chugoku, Shikoku and Kyushu regions in western Japan in August was 1.7 degrees higher than in an average year, tying the all-time high recorded in 2010.

A Pacific high-pressure system that extended toward the Japanese archipelago and a long spell of fine weather were responsible for pushing the mercury to record levels, according to the JMA.

And while the heat was on, the rain was practically gone, offering little chance for relief.

The amount of rainfall in August was only about 30 percent of what it usually is in an average year on the Pacific side of eastern and western Japan--the lowest on record.

Temperatures are expected to remain higher than in an average year across wide areas of eastern and western Japan for the next two weeks or so.