Tokyo start-up shows off manned flight of its flying car 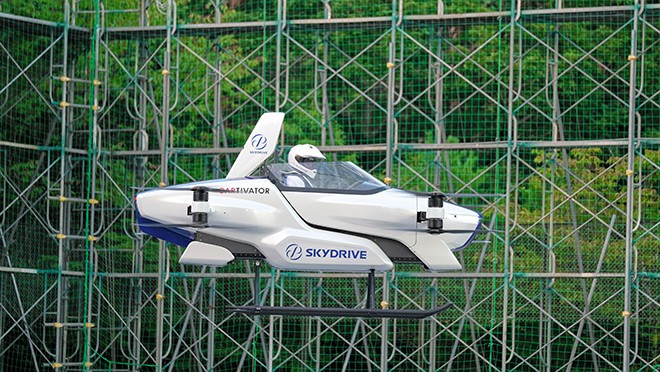 A Tokyo company has achieved what it says is the first manned flight of a flying car in Japan.

The vehicle, developed by start-up company SkyDrive Inc., rose off the ground to a height of two meters or so under the pilot's navigation and then flew in circles at a speed of 4 kph. The flight lasted roughly three minutes.

The company conducted the first demonstration for media at a test field in Toyota, Aichi Prefecture, on Aug. 25. It aims to put the vehicle into practical use in fiscal 2023 as part of a flying taxi transportation service it is considering initially for the bay areas of Tokyo and Osaka.

On Aug. 28, SkyDrive announced it had raised 3.9 billion yen ($36.8 million) from 10 corporations, including Development Bank of Japan Inc. and NEC Corp., to further its work on the flying car.

“We haven't even reached the halfway mark for its applications,” said SkyDrive's president, Tomohiro Fukuzawa, who formerly worked for Toyota Motor Corp. “We will cooperate with our partner companies to be able to achieve the same degree of perfection aircraft have.”

The single-seater vehicle boasts eight propellers arranged on four sides, resembling the design of a drone. It is roughly 2 meters high and 4 meters in length and width.

SkyDrive began manned test flights in December. As of now, the vehicle's top speed is 40 to 50 kph. Its longest continuous flight duration is five to 10 minutes.

The company said it will continue making improvements to the body of the vehicle and still has to iron out possibilities for how the vehicle will be used.