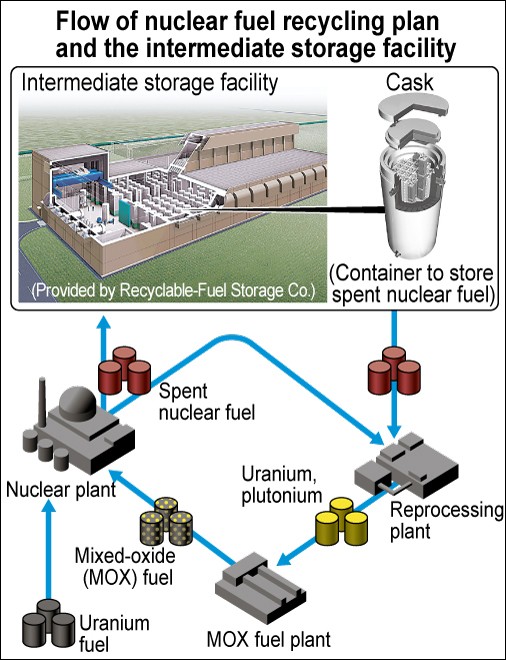 The government describes the storage center as an intermediate facility, but local government officials fear the site will end up being a permanent home for spent nuclear fuel.

The government desperately needed the site because storage facilities on the grounds of nuclear power plants were filling up with spent fuel. Capacity had reached 75 percent at those plants as of the end of March, according to the Federation of Electric Power Companies of Japan (FEPC).

The Mutsu facility will use metal casks about 5 meters high with double lids to tightly seal in the spent nuclear fuel.

A dry method will circulate air to naturally cool the fuel, meaning the nuclear waste can be stored during natural disasters when power outages may occur. Storage facilities that circulate water to cool the spent fuel are vulnerable if electricity is knocked out.

The Mutsu facility will initially have a storage capacity of about 3,000 tons, and between 200 and 300 tons a year will be moved there from TEPCO’s Kashiwazaki-Kariwa plant in Niigata Prefecture and Japan Atomic Power’s Tokai No. 2 plant in Ibaraki Prefecture.

Future plans call for increasing the capacity of the storage facility to 5,000 tons.

The government had long planned to deal with the waste through a nuclear fuel recycling policy that would use plutonium processed from spent nuclear fuel to produce mixed-oxide fuel.

But the reprocessing facility planned for Rokkasho, also in Aomori Prefecture, has been plagued by problems, and completion of the facility has been delayed by 25 years.

The nuclear fuel recycling policy has hit a major roadblock, and calls have grown to scrap the expensive project.

When RFS was established, TEPCO and Japan Atomic Power signed an agreement with the Aomori prefectural and Mutsu municipal governments pledging that spent nuclear fuel would be kept at the Mutsu facility for a maximum of 50 years.

But local officials and residents have raised doubts about whether the fuel will ever be moved out of the Mutsu facility.

According to the FEPC, storage facilities at nuclear plants currently contain about 16,000 tons of spent nuclear fuel. If capacity is reached, the plant would have to stop operations because of a lack of space for new spent fuel.

The FEPC plans to increase overall capacity of storage facilities, including the Mutsu site, by about 6,000 tons by around 2030.

Kansai Electric Power Co. is considering construction of a facility with storage capacity of about 2,000 tons outside of a nuclear plant. The company plans to reveal the proposed site before the end of the year.

In March, the Mutsu city government adopted an ordinance to tax the storage facility. The city government expects total tax revenues of 9.4 billion yen ($88.5 million) over the first five years of operation.

But RFS officials have been negotiating for a reduction, arguing that operations would not be able to turn a profit under such a burden.

At a Sept. 2 news conference, Mutsu Mayor Soichiro Miyashita urged RFS to compromise so that an agreement can be reached soon.

(This article was written by Norihiko Kuwabara and Taiji Ito.)