Experts urge caution for some areas amid drop in virus cases 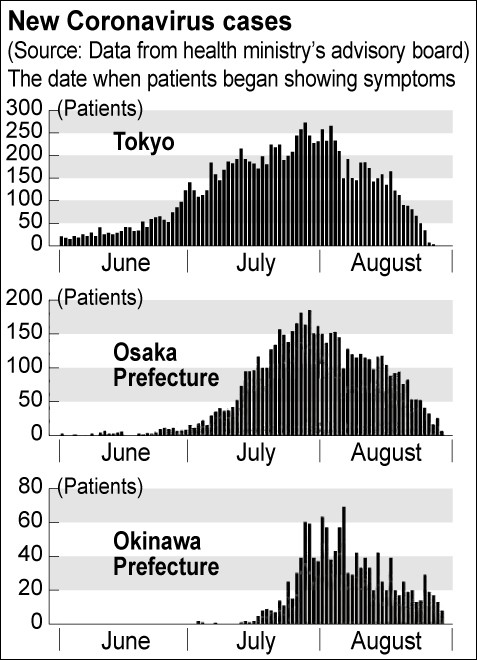 New COVID-19 cases are slowly declining across most of Japan, but some prefectures, including Fukuoka and Okinawa, need to be closely monitored, according to a panel of experts advising the health ministry.

The panel, which met on Sept. 2, also reported numbers suggesting the fatality rate was lower in the second wave of infections in the summer than during the first wave, which had spread in the spring.

The experts said new cases appear to have been slowly decreasing nationwide since the end of July. That is according to an analysis based on the dates when patients began showing symptoms, rather than when their infections were officially confirmed.

The number of new infections that can spread from just one infected person, called the effective reproduction number, remains close to one in Tokyo. But the panel urged caution for other areas, raising concerns that the number is possibly higher than one in Fukuoka and Okinawa prefectures.

Even though Osaka Prefecture’s number is currently below one, experts said they are closely watching the situation because the number of patients in serious condition is still high.

The panel’s analysis is based on data collected through the middle of August.

They said it will still take a couple more weeks to gauge the effect of people traveling across prefectures before and during the traditional Bon holiday week, roughly from Aug. 13 to Aug. 16.

The panel presented a fresh data analysis by the National Institute of Infectious Diseases at the meeting that shows a drop in the mortality rate from the virus when comparing the figures in May and August.

The report said the mortality rate in August was 0.9 percent, compared with 7.2 percent in May, across all age groups.

As for patients aged 70 or older, the figure in August was 8.1 percent, 17.4 percentage points lower than in May.

Takaji Wakita, who heads both the advisory panel and the institute, suggested possible reasons for the drop include health care workers detecting more patients with mild symptoms, including the elderly, due to an increase in testing, and improved treatment.

But he cautioned that the institute’s assessment is not definitive.

A separate study shows the May and August mortality rates are about the same for senior citizens.

“We need to do extra analysis to determine which finding is accurate,” he said.

Health ministry officials said at the meeting they are preparing a new testing regime for the upcoming flu season.

They laid out a plan to establish a system capable of testing 200,000 people a day for the coronavirus to prepare for simultaneous outbreaks of flu and COVID-19 in winter.

The planned testing system will allow people to take tests for both the novel coronavirus and the flu. Medical experts note that it is difficult to distinguish between patients with these two viruses simply based on their symptoms.

The system would employ easy-to-use antigen test kits that involve nasal swabs, according to ministry officials. The results would be available in about half an hour.

Doctors would decide whether a patient should be tested for both respiratory illnesses.

Ministry officials also said a new working group will be set up under the advisory panel. It will review the current setup of requiring patients to be hospitalized under the infectious disease law if they are diagnosed with the novel coronavirus.

Nobuhiko Okabe, a doctor who serves as the director-general of the Kawasaki City Institute for Public Health, will chair the group.

The group will include infectious disease experts and doctors treating COVID-19 patients, as well as members of the advisory panel.