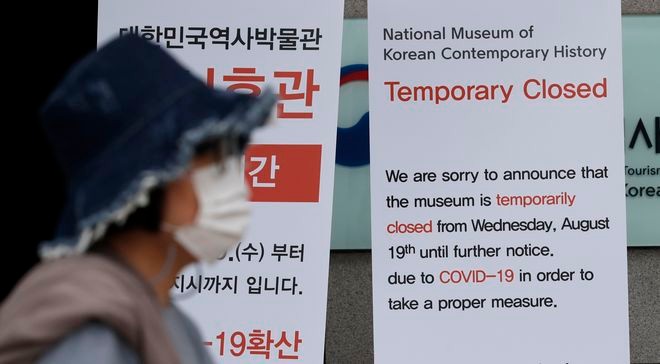 A woman weaning a face mask walks near the notice showing a temporarily closed as a precautions against the coronavirus outside of the National Museum of Korean Contemporary History in Seoul on Sept. 1. (AP Photo)

SEOUL--South Korea, scrambling to control a second wave of COVID-19, vowed on Thursday to double its critical-care hospital beds amid a severe shortage, highlighting the strain of the pandemic on even well-equipped countries.

The spike in serious cases, as older people make up an increasing proportion of patients amid a broader resurgence, marks a sharp turn for a country that was seen as successful in crushing one of the worst early outbreaks of the new coronavirus outside China.

Fewer than 10 intensive-care beds were available in the greater Seoul area, a metropolis of 26 million people, as of Tuesday, health authorities said. Officials do not give daily numbers, which can fluctuate widely.

The Health Ministry said it will spend 100 billion won ($84 million) to acquire 500 beds for severely ill patients nationwide by the middle of next year, aiming to secure at least 110 by the end of the month.

“We are also exerting our full efforts to enable stable treatment for the patients,” the ministry’s director-general for public health policy, Yoon Tae-ho, told a news briefing.

South Korea has 511 critical-care beds, mostly at public hospitals in Seoul and surrounding regions, but many of those are being used by less serious cases or patients suffering from other ailments.

As of Thursday, 154 COVID-19 patients were in serious or critical condition, up from 123 on a day before. The country had just 12 such cases before the second-wave began to intensify two weeks ago, stemming from an outbreak among members of a church who attended a political rally.

South Korea was caught unprepared for the resurgence despite its relatively successful response to the initial epidemic, said Choi Jae-wook, a senior member of the Korean Medical Association.

“The government appears to have grown complacent after the daily rate of infections fell to the low double digits,” said Choi, who teaches preventive medicine at Korea University. “They didn’t take proper steps to address bed shortages even after they struggled with it early this year.”

The crisis is growing more acute as more than 40% of the country’s new coronavirus victims are 60 or older, up from 20% a month ago, health authorities said.

A coalition of South Korean doctors and pharmacists’ groups has warned that more intensive-care beds and trained nurses were needed in the Seoul area.

“Now our deepest concerns are coming true,” the coalition said in a statement last week.

Woo Seoc-kyun, who steers the coalition, said the government plan to arrange more beds in public hospitals would help address long-term needs but would fall short of curbing the current spread.

The government managed to hospitalize all the new cases after some institutes provided beds, while some patients were transferred to general wards and others died, said Lee Chang-joon, a ministry official in charge of hospital bed management.

South Korea has among the most hospital beds per person among Organization for Economic Co-operation and Development countries, while it is near the OECD average for intensive-care beds.

The country has been gripped in recent weeks by ongoing strikes by thousands of doctors and medical students over government healthcare reform plans, although officials said this has had little effect on the shortage of critical-care beds because it was idling few beds and military medics and volunteer nurses were staffing the facilities.

South Korea’s daily reported infections dropped below 200 for the first time in more than two weeks on Thursday, even as more serious cases continued to rise. The country has reported a total of 20,644 cases with 329 COVID-19 deaths.