VOX POPULI: Hong Kong’s separation of powers is dead in the water 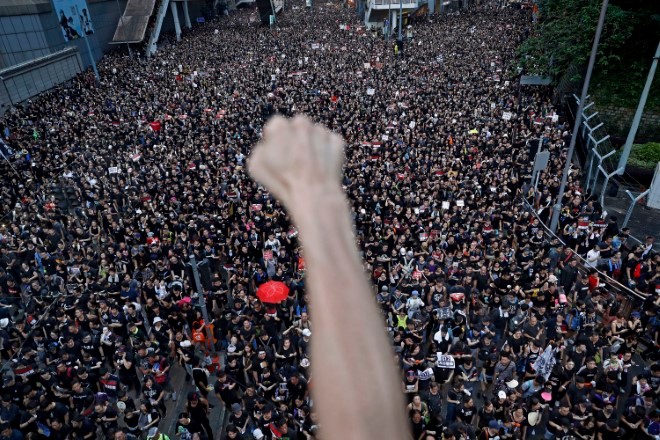 Protesters march on the streets against an extradition bill in Hong Kong on June 16, 2019. (AP file photo)

By the time he was close to completing this tour de force, his eyesight had deteriorated to the point where he wrote in a letter to the effect that the more his power diminished, the bigger his book grew, according to "Montesquieu" by Swiss literary critic Jean Starobinski (1920-2019).

With its basic message that the three powers of government--legislature, judiciary and executive--ought to remain independent from one another to prevent abuse of power, "The Spirit of the Laws" earned instant acclaim upon its publication in 1748, and was translated into both English and Italian.

It was read in America, where the message inspired the authors of the Constitution of the United States.

Over the centuries, many modern states have embraced the concept of the separation of the three powers as their fundamental principle of government.

But developments in Hong Kong today clearly suggest the clock is being turned back.

Carrie Lam Cheng Yuet-ngor, the current chief executive of Hong Kong, declared on Sept. 1, "There is no separation of powers in SAR (special administrative region)."

This means the executive branch, which is under Beijing's control, supersedes the legislature and judiciary.

The people of Hong Kong take pride in the fact that even though there is no full-fledged democracy in Hong Kong, this is at least compensated by "the rule of law" and "equality under the law." But is this no longer the case?

According to pro-democracy activist Agnes Chow, who was arrested under China’s new national security law, investigators presented an advocacy advertisement that she had placed last year in the Nihon Keizai Shimbun (The Nikkei) as evidence of her violation of the law.

If something done before the national security was enacted is seen as a crime, the rule of law is effectively as good as dead.

And if anyone has to stand trial for seeking help from the international community, we are all in deep trouble already.

What happens when the judiciary and executive become one? Montesquieu wrote: "Were (the judiciary power) joined to the executive power, the judge might behave with violence and oppression."