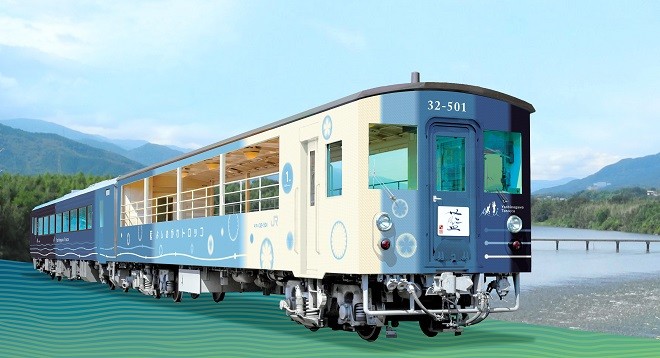 The Ai Yoshinogawa Torocco, a collaborative project between the railway company and the prefectural government, will make a round trip once a day between Tokushima and Awa-Ikeda stations on the Tokushima Line mainly on weekends during tourism seasons.

An open-deck carriage and a diesel-powered railcar used for the Shikoku-Kochi Bakumatsu-Ishin-go trolley train, which ran on the Dosan Line in Kochi Prefecture until the end of November last year, will be remodeled for the new service.

Each car will be repainted in indigo (“ai” in Japanese), bearing the logo of “Ai” rendered with a dynamism reminiscent of the Awa Odori dance.

The train’s body will be painted with a color gradation changing from white to indigo, flowing curved lines in three colors and polka dots. The design expresses the flow of the Yoshinogawa river and the nature-rich environment and calm climate of the Awa region.

The emblem was drawn in indigo ink by Sankei Amo, a calligrapher based in Anan in the prefecture.

The Ai Yoshinogawa Torocco will depart from Tokushima Station at 10:34 a.m. and from Awa-Ikeda Station at 2:39 p.m. It will stop at major stations along the line, and each excursion will take about two and a half hours.

Passengers can board the open-deck carriage between Ishii and Awa-Ikeda stations. They can enjoy views of Minoda-no-Fuchi and other scenic spots along the Yoshinogawa river and the Tsurugisan mountain range to the south when the train runs through the western part of the prefecture, according to the company.

The Ai Yoshinogawa Torocco will operate on Saturdays, Sundays and holidays from Oct. 10 and in November, as well as on March 27 and 28 next year. It is scheduled to run from April through May and from September through November next year.

In addition to the regular fare, a reserved-seat charge of 530 yen ($5) for adults and 260 yen for children is necessary.

Kurioshoten Co., a traditional Japanese confectionery shop in Tsurugi, will revive an “ekiben” boxed lunch sold at stations and on long-distance trains to celebrate the start of the Ai Yoshinogawa Torocco.

The company initially came up with the treat in 2005 when no ekiben were available in Tokushima Prefecture. But it has rarely been sold in recent years.

The revived ekiben is a dish of chicken-flavored steamed rice, with ground chicken, scrambled egg and pieces of salt-grilled Awaodori chicken placed on top.

The ekiben is sold for 1,000 yen, including tax. Reservations must be made at least four days in advance.