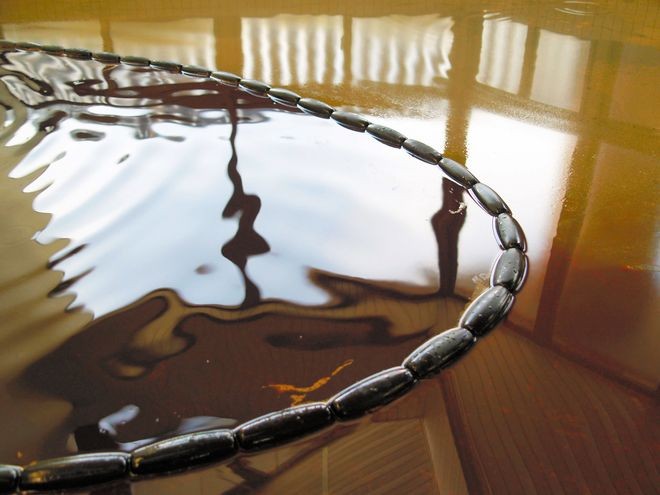 A barrier prevents oil from spreading in the sticky water at the Fureai Center public bathhouse in the Toyotomi spa resort in Hokkaido. (Provided by Toyotomi town)

TOYOTOMI, Hokkaido--A yellowish oily membrane on bathing water that emits the odor of petroleum has drawn thousands of people to this area known as Japan’s northernmost hot spring resort.

Some of the visitors have even relocated to this northern town because the oil-mixed spa water has helped those suffering from skin problems. The effects of the water have also eased the psychological burden on the patients.

The Toyotomi hot spring zone formed when spa water sprang out during oil prospecting in 1926. Still featuring petroleum components, the spa water is found hardly anywhere else in the world.

One recent morning, more than 10 people, including a youngster and an old man with a walking stick, lined up in front of the municipal Fureai Center public bath before its opening.

Many patients with atopic dermatitis and psoriasis, a disease marked by scaly patches, come from around the country to Toyotomi and stay at nearby lodging facility for long periods of recovery.

Kumiko Akimoto, 40, found comfort in the Toyotomi spa resort here, not only because she saw her conditions improve after bathing but also because she could meet people who understood her pain.

Akimoto, who hails from Kyoto Prefecture, found her atopic symptoms worsen several years ago. Prescribed medicines did not work, and she sometimes could not move around as usual for up to a week.

She heard about Toyotomi and visited there in January last year.

“My condition improved so much that no one could identify me as an atopic patient around the fifth day of my stay,” Akimoto said.

She moved to Toyotomi in October 2019.

“All people in the town are very knowledgeable about atopic symptoms,” said Akimoto, explaining her decision. “When I tried to wash dishes, a person showed kindness by telling me that ‘you must use gloves.’”

Atopy is a disorder characterized by itchy rashes on the skin, and no radical treatments have been discovered. Even if the atopic condition appears to improve, the disorder often worsens suddenly.

Many people with the condition have difficulties sharing their feelings about their suffering.
Sanae Katagiri, 43, who relocated from Aichi Prefecture and now works as an adviser for visitors to the Fureai Center, noted that Toyotomi helps atopic patients ease their mental burden as well.

“This is a special place where individuals troubled by the same issue can easily talk about their problems,” Katagiri said.

Half of those who seek Katagiri’s bathing advice are in their 20s to 30s.

She said visitors may enter the facility looking depressed, but they are generally smiling when they leave after taking a bath and enjoying the conversations.

“It is a pleasure to see the radiant faces of visitors,” she said.

The oil spa water has also provided an advantage for the local community.

However, in fiscal 2017, 25,300 people visited Toyotomi for bathing, and 36 relocated to the town permanently.

In March last year, the Ukasuymosir share house, boasting a fashionable black appearance, opened near the bathhouse. The house was started by a 39-year-old man who had frequented Toyotomi from Sapporo and became captivated by the town.

The accommodation facility is fitted with self-cooking equipment and a space for guests to interact with each other.

“I wanted to change the negative image of using spas for curing illnesses,” the man said. “I will create a place where people can meet and something new can emerge from their exchanges.”