Maglev train models can run above the track just like an actual one. (Video by Akihito Usui) 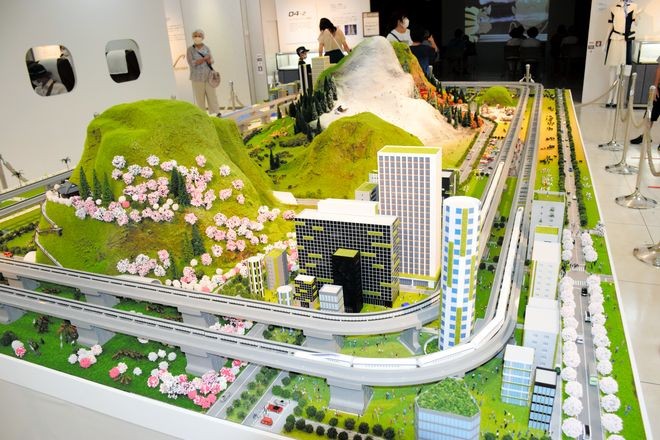 An N gauge maglev replica with 10 cars operates in a diorama set up at the event venue within the JR Nagoya Takashimaya department store in Nagoya’s Nakamura Ward on Aug. 18. (Akihito Usui)

HEKINAN, Aichi Prefecture--Although the ultrafast Chuo Shinkansen Line won't start running for many years, model railroad buffs can get a sneak preview, thanks to a small toy company here.

Noel Corp. completed a 1/150 scale model of the L0 series maglev Shinkansen through six years of trial and error.

The faithful reproduction of the test train for the Chuo Shinkansen Line will soon hit the market under the popular N gauge scale standard.

The model will boast magnetic force to raise the train off the tracks as well as a super-fast speed equivalent to more than 500 kph for its full-size counterpart.

Noel’s maglev model system includes a 3-meter round track on which a four-car train measuring 50 centimeters runs. Noel has begun accepting orders for the set, which will be priced at 65,000 yen ($610) before tax.

The train’s body and track are fitted with magnets, while the bridge foundation along the course is equipped with a sensor and electromagnet. All these are designed to pull the train up from the track through magnetism so the cars can run at high speed.

The product’s development started in 2014 at the urging of Takeshi Nonomiya, 57, president of Noel, which has no more than six employees.

Noel, which was founded by Nonomiya in 2003, had designed mainly helicopter models and other airworthy toys, along with various other products, and just released a maglev trial train replica for display purposes though it can stay in the air through magnets.

“Our company’s motto is ‘creating one from zero,’ and I wanted to develop an item that would be deemed as our crowning achievement,” said Nonomiya. “We had been devoting ourselves to making ‘airworthy’ products, so I chose the maglev train.”

At the start, a team headed by Tetsuo Yagi, 55, vice president of Noel, began experiments while taking advantage of various relevant technologies. But the team quickly faced many challenges, such as the model not moving, an improved version operating too slowly and bobbing up and down violently.

In 2015, major toymaker Tomy Co. released a toy maglev train that can run on magnets ahead of Noel. But the fact rather inspired the small business to accelerate its effort to finish its brainchild.

To further refine its creation, Noel decided its maglev replica should be able to speed up and down both forward and backward, operate for many hours and have an appearance identical to that of the actual maglev on the N gauge scale.

N gauge scale is a common standard for rail models, allowing cars of different kinds to be combined so as to create a diorama.

Nonomiya and others manually made coils and other components necessary for experiments, and the train control system was at the hands of a 70-something former engineer.

Noel employees suggested improvements, such as stabilizing the body by putting a weight in the car. They also spent much time collecting data so the magnetic force strength and the magnetic application timing could be adjusted.

“We could make full use of ideas from everyone because of the small size of our business,” said Yagi, looking back on those days.

The design of the model was eventually finalized last year under the supervision of Central Japan Railway Co. (JR Tokai), operator of the planned maglev line.

Noel solicited funds for production, but failed to reach the target amount due in part to the fact that the company is not widely known. Seeing the results, a staff member of Noel proposed that the maglev model project be scrapped.

Meanwhile, Noel received a succession of emails from rail buffs who saw its prototype at exhibitions, saying they “would definitely buy it if released.”

The train replica was also selected as a gift presented to those who make donations to Hekinan under the “furusato nozei” (hometown tax payment) program.

After the JR Nagoya Takashimaya department store requested the maglev model go on display at an event within the outlet in Nagoya in August this year, Nonomiya set his heart on putting the toy on sale.

As of Sept. 2, orders for about 100 sets have come in. As small and midsize auto-related companies in the prefecture’s Okazaki and Hekinan are in charge of manufacturing parts, models will be delivered as soon as their assembly is finished.

Currently, the beginning of operations of the section between Tokyo’s Shinagawa and Nagoya stations along the Chuo Shinkansen Line, which was scheduled for opening in 2027, will likely be pushed back, but Nonomiya said he does not care about the postponement.

“We will simply continue creating more maglev-associated products that other firms cannot make until the day of the opening,” he said. “Running a small corporation is difficult, but it is also important to pursue our dreams in a balanced manner.”

For inquiries on the product, visit Noel’s website at (http://www.noel.ac).