Imperial couple grappling with ways to reach out in pandemic 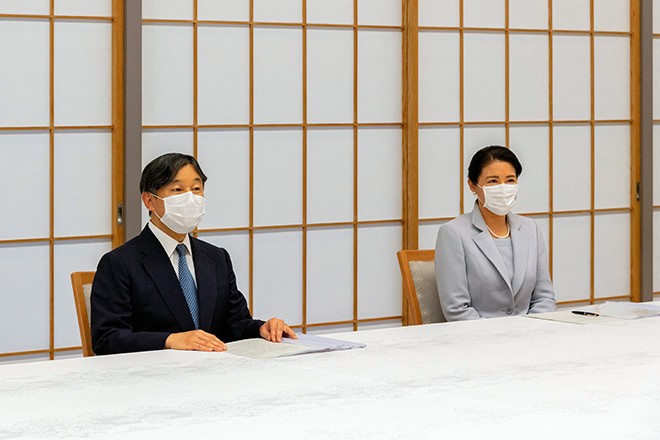 Emperor Naruhito and Empress Masako listen to an explanation from Yoshiharu Otsuka, president of the Japanese Red Cross Society, and others at the Imperial Palace on May 20. (Provided by Imperial Household Agency)

Stuck at home because of the novel coronavirus, Emperor Naruhito and Empress Masako are seeking new ways to reach out to the public to offer reassurances and encouragement.

Living in near-"lockdown" in the moated palace in central Tokyo is proving especially galling as meeting people in times of distress has been a hallmark of imperial family life since the Heisei Era (1989-2019).

The emperor and empress have already had to sharply curtail their public outings and other domestic duties.

The Imperial Household Agency is keen for the couple to avoid congested situations where they come into close contact with people or find themselves in venues that are poorly ventilated.

Naruhito and Masako were forced to cancel four scheduled visits to regional areas to attend annual events such as the National Arbor Day Festival and the National Sports Festival.

Naruhito also postponed a planned visit to Britain that would have been his first overseas trip since ascending the Chrysanthemum Throne.

Given the unprecedented atmosphere facing the imperial family, the Imperial Household Agency took the unusual step of releasing a comment made by Naruhito on May 20 when he met with Yoshiharu Otsuka, president of the Japanese Red Cross Society, and others at the Imperial Palace.

“I believe it is important to surmount the difficult situation we face by bringing together all of our abilities and feelings as one in moving toward overcoming the infectious disease,” Naruhito told the gathering.

The meeting was one of many that allow the emperor to listen to what experts have to say about various issues facing the nation. Those sessions are, in principle, off the record so it was highly unusual for the agency to reveal what the emperor said.

The drastic reduction in activities on the part of the imperial family appears to have been behind the decision to release Naruhito’s comment.

In addition to the planned visit to Britain by the imperial couple, a ceremony officially proclaiming Fumihito as crown prince has also been postponed because of the COVID-19 pandemic.

A high-ranking agency official admitted that finding ways to convey to the public the thoughts held by Naruhito and Masako about wanting to share in their joys and sorrows had proven difficult.

Since April, Naruhito and Masako have heard from numerous experts and specialists dealing with issues raised by the novel coronavirus pandemic. Those individuals spoke about the ramifications on the economy as well as what is being done at day-care centers and in providing for those facing difficulties in their daily lives.

But getting word out to the public about the concern the emperor and empress feel has fallen somewhat short in the opinion of some officials.

A number of experts have suggested that Naruhito follow the example of Britain’s Queen Elizabeth and deliver a video message to the public, calling on the public to work together.

However, an Imperial Household Agency source said, “The coronavirus pandemic is a theme closely entwined with politics, so we have to ensure he is not being used in a political manner.”

With these concerns in mind, Naruhito made his first public comment about the COVID-19 pandemic during his address at the memorial ceremony for the war dead on Aug. 15, when he said, “I sincerely hope that we all work together hand in hand to overcome this difficult situation and continue to seek happiness of the people and world peace.”

The mention of the coronavirus pandemic stands out in the message because past addresses never included any reference to natural disasters or the social situation prevailing at the time.

At a news conference, Kenji Ikeda, vice grand steward at the Imperial Household Agency, said: “There was a large effect on the holding of the ceremony itself because many relatives decided not to attend because of the spread of COVID-19 infections. It was only natural to include that reference in the message meant for the souls of the war dead.”

Naruhito and Masako recently listened in to an international conference on the theme of preventing water disasters while the pandemic rages.

Crown Prince Fumihito has held videoconferences with people in various sectors affected by the pandemic.

But it remains to be seen if such online measures will be used between the imperial family and the public.

Yasuhiko Nishimura, grand steward of the Imperial Household Agency, said: “I believe the feelings of (the imperial couple) will not be transmitted online. While online communications might be used to listen to explanations, it will likely be difficult to use that in place of their activities.”

Takeshi Hara, a professor of history of Japanese political thought at the Open University of Japan, is closely following how Naruhito decides to pass on future messages.

“Through the response to the coronavirus pandemic, it might be possible to observe early on how the image of the emperor during the Reiwa Era differs from that of the Heisei Era,” Hara said in reference to the way Naruhito's parents, Emperor Emeritus Akihito and Empress Emerita Michiko, went out of their way to meet with people affected by natural disasters.