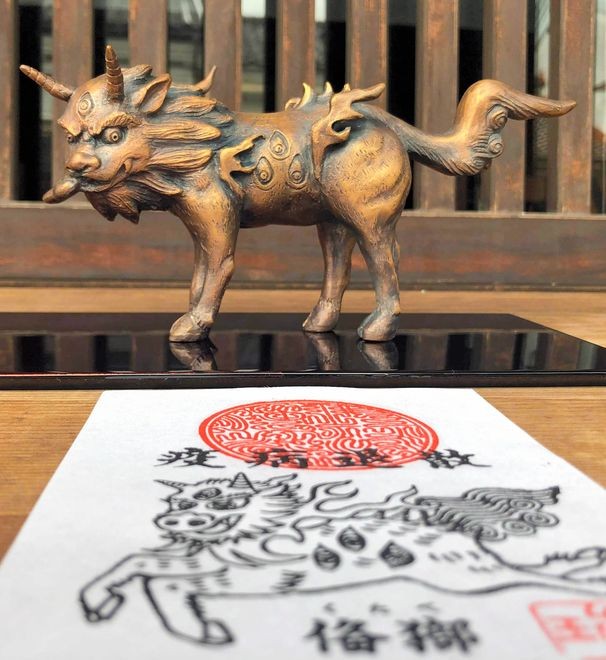 TAKAOKA, Toyama Prefecture--Local copperware artisans hoping to inspire resilience and hope amid the pandemic have forged a statue of Kutabe, a mythical plague-fighting animal said to have once appeared on the prefecture’s sacred Mount Tateyama.

The mystical creature is enjoying a resurgence in popularity after an illustration drawn by the late Shigeru Mizuki, the manga artist famous for his "Gegege no Kitaro" horror comic series, was posted on social media in March.

Kutabe has a somewhat human-like face and the body of a beast, according to the Tateyama Museum of Toyama.

Legend has it, the animal appeared in front of a person who came to the mountain to collect medicinal herbs.

It then predicted that there would be an epidemic, but told the person that anyone who saw it could escape the plague. That belief, made popular during the Edo Period (1603-1867), makes it similar to the now incredibly popular plague-fighting yokai monster Amabie, in which spotting one is believed to be a good omen against disease.

"We wanted to make use of Toyama craftsmanship skills to create something that could bring hope amid the coronavirus pandemic," said Tappei Maruyama, a mold maker and Buddhist statue sculptor based in Imizu, who came up with the idea for the project.

Maruyama, 44, enchanted by the creature’s mythology, approached Kotaro Kunimoto, 48, representative of lacquerware retailer Kunimoto in Takaoka, and Heiwa Gokin Co., a local foundry, with his plan to create a Kutabe statue.

Kunimoto incorporated elements into the design based on Hakutaku, a mythical animal from a Chinese legend often identified with Kutabe. They also added the features of a lion--a frequent theme of Takaoka copperware. The gallant statue is 20 centimeters long, 9 cm wide and 10 cm tall.

Sold as a set with an exclusive mount, the statue retails for 45,000 yen ($424), excluding tax. It comes with an amulet for warding off epidemics distributed by Zuiryuji, a national treasure temple in Takaoka.

Part of the proceeds will be donated to areas hit hard by the recent torrential rains, they said.

The statue is available for purchase at Kunimoto in Takaoka's Konmadashimachi district and through its website at (http://www.kunimoto-japan.com/)