BBQ triggered leak of hazardous foam from base into local river 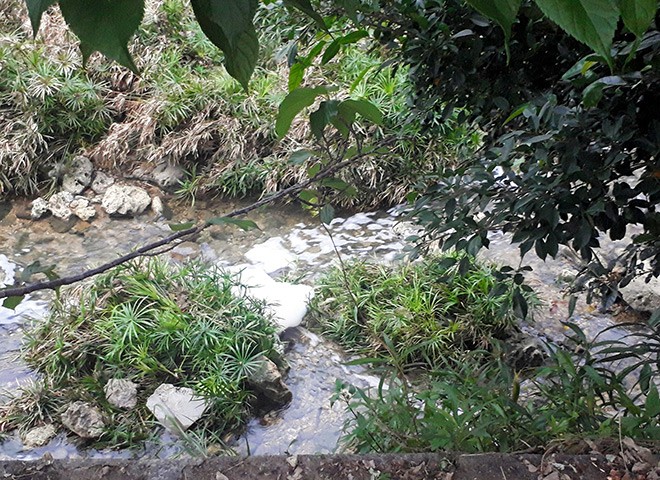 Firefighting foam is visible in a river in Ginowan, Okinawa Prefecture, a day after it leaked out from the U.S. Marine Corps Air Station Futenma in April. (Asahi Shimbun file photo)

A barbecue held to boost morale among U.S. military personnel self-isolating at the Marine Corps Air Station Futenma in Okinawa Prefecture set off a heat detector that in turn activated carcinogenic firefighting foam which leaked into a nearby river in April.

The Defense Ministry announced the finding Sept. 4 after it was conveyed to it by the U.S. military.

The barbecue was set up about three to six meters from a storage facility that contained firefighting equipment.

Personnel at the barbecue site as well as the first response team that arrived at the scene had no idea how to temporarily turn off the firefighting equipment, which ended up operating for about 30 minutes.

Normally, the firefighting foam that leaked from the facility would have been collected in an underground tank, but improper maintenance resulted in the organic foam leaking outside the base.

The barbecue was held to bolster the spirits of soldiers required to self-quarantine against the novel coronavirus after they returned to the Futenma base from an overseas assignment in late March.

Three of the soldiers suffered minor symptoms after coming into contact with the foam which contained Perfluorooctane Sulfonate (PFOS). Japan has banned the production, importation and use of PFOS since 2010.

The Defense Ministry and Okinawa prefectural authorities also released the results of their investigation in cooperation with the U.S. military of water quality and soil samples within the Futenma base.

Soil samples taken from near a ditch had a reading of 38.2 nanograms per gram.

However, Japan has no benchmark for PFOS pollution of soil.

Defense Ministry officials did not make an issue over the water quality because the water is inside the base. The Environment Ministry’s benchmark applies to public waterways such as rivers and ponds. The U.S. military commented that the water quality recordings did not pose a health risk.

From April 21, officials of the central and Okinawa prefectural governments entered Futenma base for an on-site investigation under provisions of an environmental supplementary agreement to the Japan-U.S. Status of Forces Agreement.

U.S. military personnel collected the water and soil samples while Japanese officials observed the procedure. The samples were tested separately by the central and prefectural governments as well as the U.S. military.

(This article was written by Shinichi Fujiwara and Mika Kuniyoshi.)