Trees sway in violent winds in Ibusuki, Kagoshima Prefecture, on Sept. 6 as the extremely powerful Typhoon No. 10 approaches. (Video by Ryo Kato) 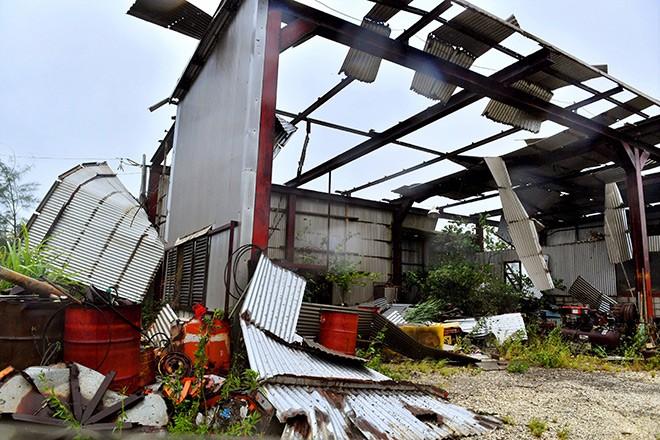 A destroyed hut with its tin roof blown off shows the effects of powerful gusts unleashed by Typhoon No. 10 on Minami-Daitojima island in Okinawa Prefecture on Sept. 5. (Provided by The Okinawa Times)

As extremely powerful Typhoon No. 10 barrels on a collision course with southern Kyushu between Sept. 6 and 7, the Japan Meteorological Agency is warning of destructive winds and storm surges.

The typhoon is expected to approach or make landfall on Kagoshima Prefecture between the early evening to late night on Sept. 6, according to the JMA.

The agency is calling for vigilance against powerful gusts, heavy rainfall and storm surges from the typhoon, although the likelihood of issuing a special alert has lessened somewhat.

As of 3 p.m. on Sept. 6, the Fukuoka city government issued a recommendation for evacuation for 773,914 residents of 387,900 households in the city, citing the danger of landslides and flooding.

The evacuation recommendation affects about half the residents of Fukuoka.

The agency on Sept. 6 said that more than 120 millimeters of rain is believed to have fallen over an hour through 11:40 a.m. the same day in areas in the northern part of Yakushima island in Kagoshima Prefecture, setting a record-level rainfall over a short time period.

As of 5 p.m. on Sept. 6, the typhoon was traveling northward about 70 kilometers west-southwest of Yakushima island at a speed of about 35 kph. Its atmospheric pressure was 945 hectopascals at the center, with 162 kph in maximum sustained winds and 216 kph in maximum instantaneous wind speed.

The land ministry raised an alarm after meeting with the JMA on Sept. 5 for torrential downpours of an unprecedented level that could swamp southern parts of Kyushu.

Major rivers have been equipped with levees to deal with the maximum rainfall predicted in those areas.

But areas close to the Kumagawa river in Kumamoto Prefecture will likely see overflowing banks as flood prevention controls were damaged in heavy rains in July.

Caution against torrential rain has been urged for the Shikoku, Kinki and Tokai regions as well.

Maximum sustained winds could reach 162 kph in southern Kyushu on Sept. 6, according to a JMA forecast. The figure for Okinawa Prefecture was 180 kph.

These powerful winds, which are strong enough to topple some buildings, could spawn record-breaking storm surges, the agency added.