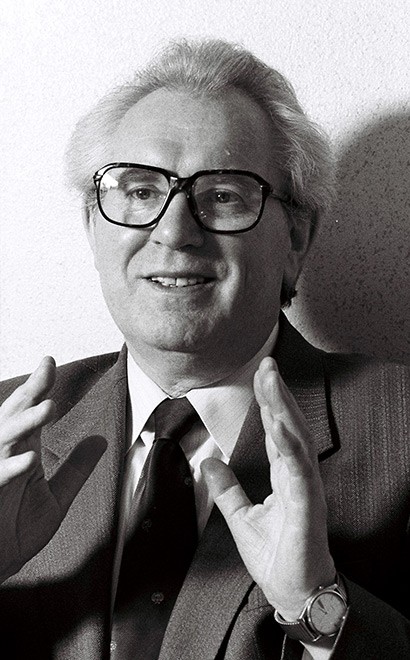 Alfons Deeken, a professor emeritus at Sophia University who spread the concept of death education in Japan, in February 1989 (Asahi Shimbun file photo)

Alfons Deeken, a German philosophy professor, author and Catholic priest who spread the concept of death education across Japan and taught how to deal with grief and loss, died of pneumonia on Sept. 6.

Deeken was a professor emeritus at Sophia University, where he taught for many years. He specialized in thanatology, or the study of death.

A funeral will be held at St. Ignatius Church in Kojimachi district of Tokyo’s Chiyoda Ward starting at 4 p.m. on Sept. 11 for Jesuits. Masayuki Semoto, a Jesuit priest, will serve as the chief mourner.

Deeken was born in Germany in 1932. The Jesuit Society sent him to Japan in 1959 and he became a priest here in 1965. He taught philosophy of death, philosophical anthropology and other courses at Sophia University, starting in the 1970s.

Alarmed by the tendency to treat discussing death as taboo in Japanese society, he later began advocating for and teaching people how to prepare for death and cope with bereavement.

His school of thought spread and citizens who supported his ideas established “Sei to Shi wo Kangaeru Kai” (Associations of Death Education and Grief Counseling) across Japan. He served as honorary chairman of the Japanese federation of these associations.

His books include “Shi to Do Mukiau ka” (How to face death) and “Yoku Iki Yoku Warai Yoki Shi to Deau” (Live well, laugh a lot and meet a good death). He was awarded the prestigious Kikuchi Kan prize in 1991.