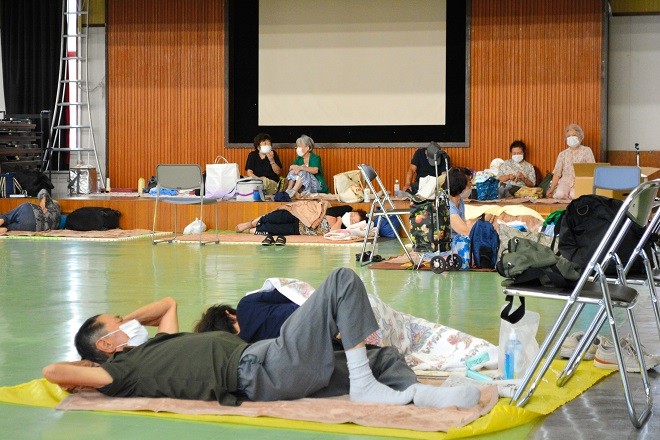 When a typhoon hit Japan in the fall three years ago, a small aircraft flew right into the typhoon's eye for meteorological observation.

Kazuhisa Tsuboki, a professor at Nagoya University, was on board. He described the inside of the eye as "a calm, warm and dry world" in his book "Gekijin Kisho wa Naze Okoru" (What causes high-impact weather episodes).

He recalled that when the plane suddenly burst free from the dense cloud in which it was flying, the raging, churning sea below leapt into view. He dropped the monitoring equipment and collected detailed data, such as the atmospheric pressure and wind velocity.

In the past, U.S. military planes used to monitor typhoons in the western Pacific, including in Japanese coastal waters. After this was discontinued, the number of extremely powerful typhoons began to grow slowly but steadily over the last three decades.

"Accurate weather information is definitely important,” Tsuboki noted in an interview with The Asahi Shimbun last year. “But voluntary evacuation is more important."

Typhoon No. 10 pummeled Kyushu with torrential rains and gale-force winds. Its satellite image showed a huge, round eye in the center.

There were fatalities, unfortunately.

But one fact worth noting is that as many as more than 200,000 people evacuated in the Kyushu, Chugoku and Shikoku regions. It appears that early calls for evacuation helped to contain the damage.

Astronaut Kimiya Yui, who once saw the eye of a typhoon from outer space, observed in his book "Hoshizora no Hikoshi" (Aviator of the star-studded universe): "A fully grown typhoon's eye reminds me of a terrifying devil."

He also noted he became so concerned about the safety of his father--a lettuce farmer in Nagano Prefecture--that he phoned him from the International Space Station.

"I know you'd want to check on your lettuce in the field, but don't,” he begged him. “Please, just evacuate."

So long as the Japanese archipelago remains where it is on our planet, there is no avoiding catching the typhoon's eye, so to speak.

Ultimately, the most important thing is to evacuate as early as possible.