Suga: No deals with supportive LDP factions for Cabinet posts 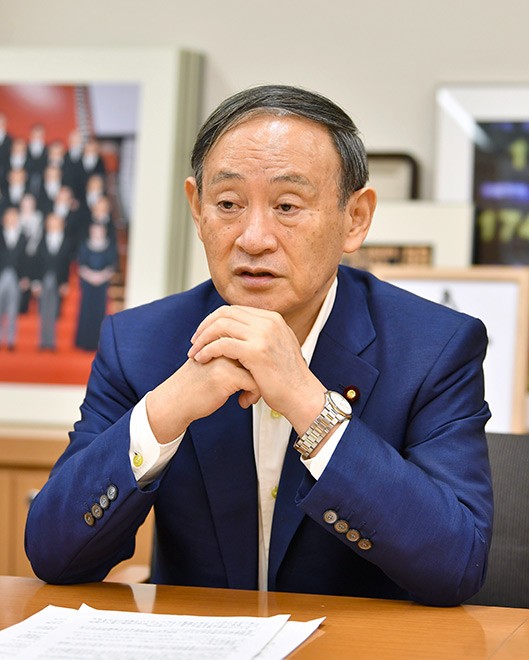 Chief Cabinet Secretary Yoshihide Suga in an interview with The Asahi Shimbun on Sept. 7 (Takuya Isayama)

Yoshihide Suga, the front-runner in the ruling Liberal Democratic Party’s presidential election, said he would not reward supportive party factions with Cabinet posts if he wins and becomes prime minister.

“I will not take requests from each political faction,” Suga, 71, said during an interview with The Asahi Shimbun on Sept. 7.

Suga, the chief Cabinet secretary who himself does not belong to any faction, has been backed by five of the seven political factions in the party. The remaining two factions are led by rival candidates, Fumio Kishida, 63, chairman of the LDP Policy Research Council, and Shigeru Ishiba, 63, a former LDP secretary-general.

But Suga said: “I will not make prearrangements with (any political faction). … I want to appoint experts in each field and those who are motivated to change (things).”

Suga said that as the government’s top spokesman, he has prioritized the handling of the novel coronavirus pandemic.

A Lower House election is expected when lawmakers’ terms expire within a year.

However, Suga noted that “the right to dissolve the Lower House is in the hands of the prime minister.”

“If the prime minister decides to dissolve it for a snap election, it has to do so,” he said.

Prime Minister Shinzo Abe, who announced his resignation in late August, had ardently sought but ultimately failed to revise the postwar pacifist Constitution.

Suga avoided mentioning a specific goal concerning constitutional reform but said, “Scheduling is not the first and most important thing to be considered.”

He added that constitutional reform is “the LDP’s policy” and that he is “willing to take up the challenge.”

Suga is also willing to push administrative reform at the central and local government levels in terms of digitization, an issue he believed the COVID-19 pandemic has highlighted.

He said he is eager to establish a ministry to deal with the administrative digitization.