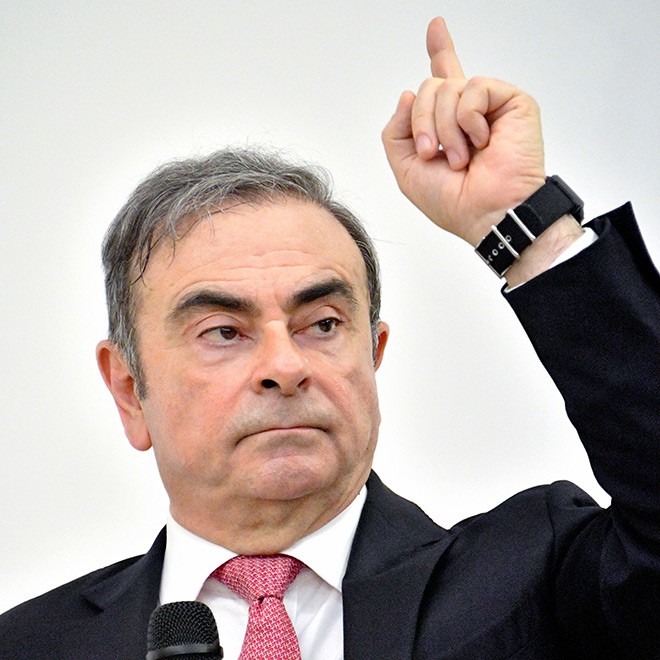 Carlos Ghosn, former CEO of Nissan Motor Co., in Beirut on Jan. 8, 2020, after he fled from Japan at the end of December (Asahi Shimbun file photo)

His trial at the Tokyo District Court opens on Sept. 15.

The Japanese officials who prosecutors say devised ways for Ghosn to keep a large chunk of his pay secret are Toshiyuki Shiga, the former chief operating officer, and Itaru Koeda, a former adviser.

However, they were not indicted because investigators at the special squad of the Tokyo District Public Prosecutors Office apparently determined that Shiga and Koeda were not directly involved in moves to underreport Ghosn’s remuneration, according to the sources.

In an interview with The Asahi Shimbun, Shiga declined to discuss the allegations on Sept. 7, but said he was not involved in wrongdoing.

“I have no choice but to refrain from commenting as I am obliged to respect the trial hearings,” he said. “I have explained (my role) to the investigative authorities and, needless to mention, I have not taken part in any illegal activity.”

Nissan, which is also charged as a company in the trial, also declined to comment.

Ghosn and Kelly were arrested in November 2018 on suspicion of violating the Financial Instruments and Exchange Law by underreporting Ghosn’s annual remuneration in Nissan’s financial reports.

Ghosn was held for months on separate occasions at the Tokyo Detention Center before being released on bail. While free, he staged a dramatic escape to Lebanon late last year. Ghosn holds Lebanese citizenship and there is no extradition treaty between the two countries.

Kelly, 63, is expected to plead innocent, while Nissan will likely acknowledge its guilt.

During the trial, prosecutors will argue that although Ghosn’s income totaled about 17 billion yen ($159 million) between fiscal 2010 and fiscal 2017, Nissan listed only about 7.9 billion yen as being paid to him in its financial reports while hiding payments totaling about 9.1 billion yen.

Ghosn is alleged to have instructed Kelly to find ways for him to receive his full remuneration without disclosing the entire sum, according to the sources.

Ghosn is said to have done so because he was concerned about a backlash if his huge salary became public knowledge.

Japan in March 2010 obliged top executives of companies to disclose their annual remuneration in financial reports.

Prosecutors also contend that Ghosn gave the same instruction to Shiga and Koeda in January 2011 or in the months following, the sources said.

In March that year, the two executives suggested that part of Ghosn’s pay could be deferred to avoid listing the full amount in financial reports, according to the sources.

This, they apparently proposed, would allow Nissan to pay the balance as compensation to Ghosn in his status as an adviser or consultant after he retired from Nissan’s board.

Shiga and Koeda allegedly proposed that the difference between his remuneration and the sum actually paid would be recorded each year by the former chief of Nissan’s secretary’s office for confirmation by Ghosn.

Prosecutors say the pair also suggested that Ghosn sign in a document describing how the payment of the balance should be made.

Kelly made a total of four suggestions concerning the payment of Ghosn’s income, including one similar to the idea presented by Shiga and Koeda and another by way of a subsidiary overseas, according to the sources.

Ghosn, the sources said, chose the option to receive the difference as compensation to his advisory role following his retirement from the board. He also agreed to the procedures of receiving the payment recommended by Shiga and Koeda.

Proposals for his contract after his retirement were drafted three times between 2011 and 2015, which were signed by top executives, including Hiroto Saikawa, former president of Nissan under Ghosn, and Kelly.