Change vs. status quo? Election for LDP president kicks off 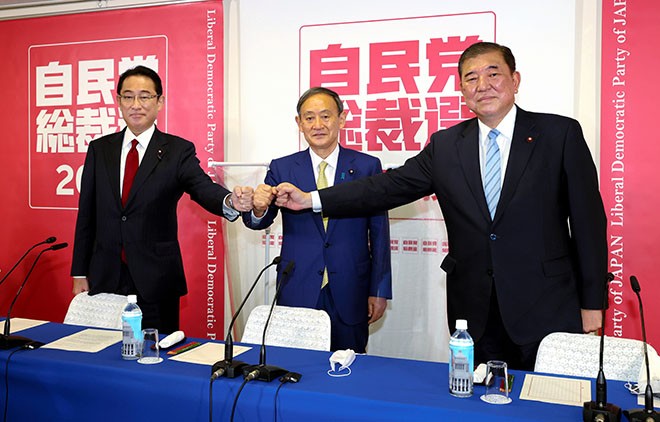 The ruling Liberal Democratic Party on Sept. 8 officially started its presidential election, with two candidates vowing change but the early favorite pushing for a continuation of the policies of Prime Minister Shinzo Abe.

The three veteran policymakers, Yoshihide Suga, Fumio Kishida and Shigeru Ishiba, made their candidacies official as soon as the campaign kicked off in the morning.

The winner of the Sept. 14 vote is guaranteed to be named prime minister in the Diet, given the LDP’s overwhelming strength.

Chief Cabinet Secretary Suga, 71, is leading the race with the support from all LDP factions except the ones led by Kishida and Ishiba.

“Somebody has got to run for the seat to solve this national crisis. That’s what I thought as a person who has been involved in the government’s handling of the novel coronavirus pandemic,” Suga said at an election kickoff party held at a hotel in Tokyo’s Kioicho district in the morning.

Before the party, Suga attended a Cabinet meeting and held a news conference as usual.

“I was late to the party because I made my official duties a priority,” he said in the speech that showed he plans to maintain the Abe administration’s policies, including the economic package known as “Abenomics.”

“Please let me do the job and steer the country at all costs,” Suga said to his supporters.

Suga has been Abe’s right-hand man since the second Abe administration started in December 2012.

Kishida, 63, chairman of the LDP Policy Research Council, was also at the hotel and held a kickoff party with his supporters in the morning.

“We the LDP need to elect a new leader,” he said. “I will clearly show my political determination, make my presence felt in the race and fight through it.”

Kishida, who served as foreign minister and defense minister and held other Cabinet positions in the Abe administration, said Japan has seen significant growth and an enhanced presence both economically and diplomatically under Abe’s leadership.

“But now, the country is facing a huge crisis, such as the battle against the novel coronavirus. We have to think about the days ahead of us,” Kishida said.

“Mainstream conservatives believe that we need to make a judgment about what people want based on hard-core pragmatism,” he continued. “If that’s so, we need the courage to change things that need to be changed.”

Kishida has promised to work to rectify social disparities and support the middle class by easing education fees and housing costs, among other measures.

“It is in the midst of melee and turbulent times when the LDP and conservatives can make a significant contribution that (the public) has asked us to do,” Kishida said.

Ishiba, 63, a former LDP secretary-general and defense minister, kicked off his campaign at LDP headquarters in Tokyo’s Nagatacho district in the morning.

Ishiba said the LDP election provides an opportunity for a “great reset.”

“We will remake the country. We will make a new Japan. I will pour my heart and soul into this election for that purpose,” Ishiba told his supporters.

He is expected to represent the voices of those critical of Abe and his handling of numerous scandals that plagued his administration.

Ishiba has pledged to rectify the excess concentration of the population and industry in the Tokyo metropolitan area and establish a ministry that deals with natural disasters.

He quoted his mentor, the late former Deputy Prime Minister Michio Watanabe, saying, “There is only one mission in politics, which is to tell the truth with courage and sincerity.”

He said he will “speak about what the party should be and inspire (people).”

Ishiba has lost in previous LDP presidential elections, and the odds are stacked against him this time.

After Abe in late August announced his resignation, major LDP factions threw their support behind Suga, even before he announced his candidacy.

In addition, LDP executives, citing the urgency of picking a new leader to deal with the COVID-19 crisis, “simplified” the election by excluding rank-and-file members and party supporters from the vote.

Ishiba, who has been popular among local party members, said: “The LDP is not a party exclusively for Diet members. The LDP is a party for rank-and-file members and the people.

“I’m absolutely committed to fight to the end and win (the presidency),” he said in his speech.

Voting and ballot-counting are scheduled for Sept. 14.

The three candidates are fighting to gain a majority of the 535 votes up for grabs.

All LDP Diet members, except speakers of the Upper and Lower houses, will account for 394 votes in the election. The 47 prefectural chapters of the LDP will each get three votes for a total of 141.

After their kick-off parties, the three rivals attended an LDP-hosted event where they delivered policy speeches and talked about their upbringings and other issues. They held a joint news conference in the afternoon.

The candidates will not hold campaign rallies and events outside of Tokyo nor make stump speeches on the streets because of the pandemic.

(This article was compiled from stories written by Tatsuro Kawai and others.)