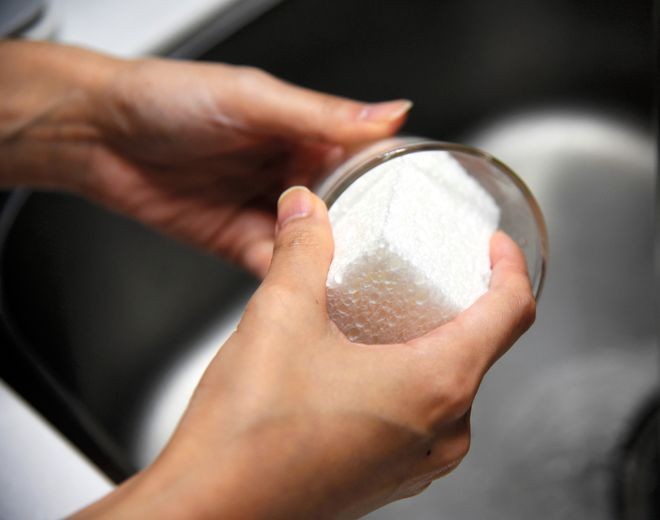 A cellulose sponge becomes fluffy when it absorbs water, making it easy to wash a glass. It also dries quickly and can be used as a kitchen cloth when it is wrung tightly. (Yu Fujinami)

Although highly publicized measures have been taken, such as eliminating plastic straws and charging fees for plastic bags at stores, plastic fragments continue to be produced in homes.

“Microplastics are also generated from synthetic fiber clothes, sponges and synthetic rubber tires. We are surrounded by plastic,” said Ryota Nakajima, a researcher at the Japan Agency for Marine-Earth Science and Technology who runs a blog on how to reduce plastic use in our daily lives.

Synthetic fibers are widely used to make clothes and other items because they are wrinkle-resistant, help keep the shape longer and can be processed for fast-drying and other features.

An overseas study showed that about 2,000 microplastic particles are produced when an item of fleece clothing is washed.

According to Nakajima, fine-mesh washing bags can help prevent microplastic fibers from being released into wastewater.

In a test at my home, a small acrylic blanket left fiber particles several millimeters long on the surface of the washing bag after a cycle.

Microplastics are also generated in the kitchen from sink strainer bags and deteriorating dishwashing sponges.

Nakajima, who practices a plastic-free lifestyle, puts compost waste into bags made of newspaper instead of sink strainer bags and uses natural cellulose sponges for dishwashing.

Microplastics are generated when plastic products are degraded by ultraviolet rays, ocean waves and other elements into fragments of 5 millimeters or less in length.

A 2019 study conducted by Hideshige Takada, a professor specializing in environmental and natural resource science at the Tokyo University of Agriculture and Technology, showed that samples of wastewater in Tokyo contained 420 microplastic particles per liter, with most of them being fibers.

At least 90 percent of the fibers are removed after sewage treatment. However, sewer water can be released without treatment when it rains.

“As a matter of fact, (microplastics) have been found in fish and sea birds, and it’s not an amount that can be ignored,” Takada warned.

The professor and other researchers in 2015 found microplastics in 49 of 64 anchovies in Tokyo Bay. At least 80 percent of the waste consisted of fragments, 5 percent were fibers, and 10 percent were microbeads, which are used for cosmetics and other products.

Microplastics can also be generated when plastic buckets and clothespins left on balconies and in gardens are degraded by ultraviolet rays, or after plastic garbage bags are ripped open by crows.

“We may be producing microplastics without even knowing it,” Takada said. “We can reduce the amount by changing our way of thinking, like using washing bags and choosing items made from natural materials.”

MICROPLASTICS IN THE AIR

Recent studies show that microplastics travel through the air, and it is assumed that we are breathing in microplastic particles.

Microplastics are also believed to be traveling through the air at the top of Mount Fuji.

“The fact that (microplastics) drift in the free troposphere means there is a possibility that plastic pollution has spread all over the world,” Okochi said. “Research on airborne microplastics is still in its early stage. We don’t really know the impact on creatures, but we must take countermeasures before it’s too late.”