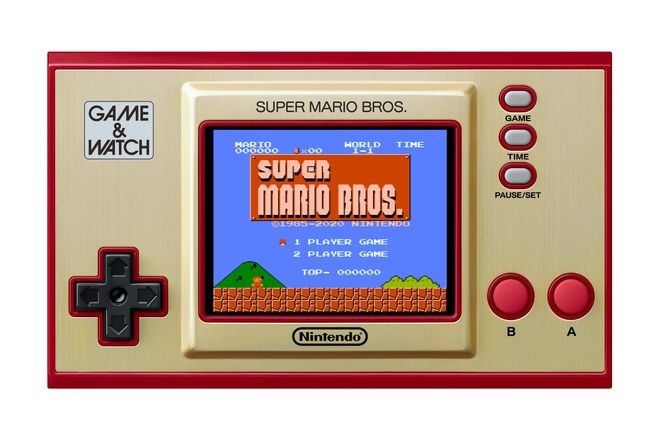 Nintendo Co.'s Game & Watch console to be re-released with a full-color screen (Provided by Nintendo)

And the nostalgic reproduction is already selling out online.

The video game company started accepting pre-orders on its official website in the evening of Sept. 3, but quickly ran out of stock. Nintendo was forced to halt its online orders the following morning. The special remake console will be back on store shelves on Nov. 13, however.

The commemorative reissue game console has been given major upgrades, now boasting a full-color screen, and it runs three built-in, classic games in full: the Nintendo Entertainment System version of "Super Mario Bros.," its sequel "Super Mario Bros.: The Lost Levels" and a special Mario version of the Game & Watch series game "Ball."

The Game & Watch: Super Mario Bros. console is priced at 5,478 yen ($51.50), including tax, and will only be produced until March next year, according to the company.

The original Game & Watch devices were first released in 1980. They sold for 5,800 yen, and each unit was able to play only one game.

The breakout success of the handheld devices in Nintendo’s early days of producing video games helped put the company on the path to becoming a giant in the industry.

Nintendo was founded in 1889 in Kyoto as a manufacturer of traditional "hanafuda" playing cards.

Nintendo started moving into electronic gaming in the 1970s when it released electronic toys for entertainment facilities. But that strategy flopped, and the company struggled financially.

The Game & Watch handhelds, made with the same technology found in digital watches, proved to be a savior.

The handhelds sold more than 43 million units worldwide, at the time offering at least 50 game titles created for the console, including the popular "Octopus."

The company released the Nintendo Entertainment System in 1983 and the Game Boy handheld in 1989, paving the way for it to become a household name worldwide.