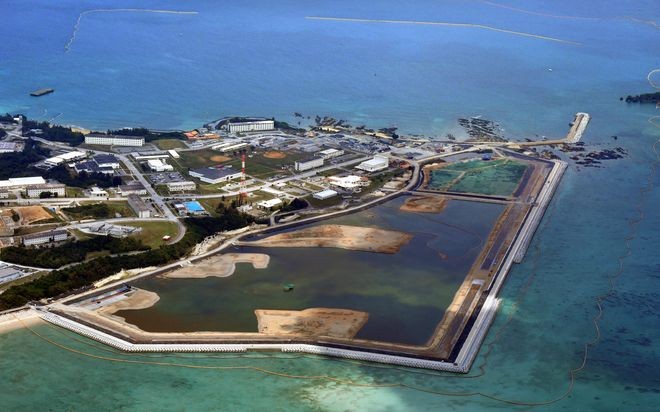 The construction site for a new U.S. air base off the Henoko district in Nago, Okinawa Prefecture (Asahi Shimbun file photo)

The next prime minister should make all-out efforts to heal the deeply strained relationship between Okinawa and the Japanese mainland and eliminate the distrust the southernmost prefecture has for the national government.

The administration of outgoing Prime Minister Shinzo Abe has been forging ahead with land reclamation work to build a new U.S. military base off the Henoko district of Nago city in the prefecture, without paying the slightest attention to the vehement opposition repeatedly expressed through local elections and a referendum.

But the discovery of extremely soft ground under the seabed where the reclamation work is under way has muddied the water with the planned facility that will take over the functions of the U.S. Marine Corps Air Station Futenma in Ginowan, also in the prefecture.

The seabed problem, which was initially covered up, has radically changed the math.

According to the central government’s new estimates, construction will take 12 more years to complete, far longer than initially expected, and cost 930 billion yen ($8.78), about 170 percent above the original estimate.

This drastic change in the outlook clearly means there will be no early return to Japan of the Futenma base site, the project’s original purpose. However, the Abe administration has kept claiming that the replacement facility in Henoko is “the only solution” to the safety threat posed by the Futenma base, located in a densely populated area.

With the Abe administration now on its way out, it is glaringly obvious what the Cabinet led by Abe’s successor should do.

The new administration should first break free of the flawed thinking that has plagued the issue, immediately stop the reclamation work, and start sincere talks with the prefectural government.

It should then seek talks with the United States over the relocation of military exercises using the Futenma base and push for revisions to the U.S.-Japan Status of Forces Agreement (SOFA), which provides the basis for the legal status of U.S. military members stationed in Japan.

The change of the administration this autumn should serve as an opportunity for the government to review and reform its Okinawa policy.

Maintaining and enhancing military bases surrounded by “hostile” local communities does not improve Japan’s national security. It is vital for the Japanese and U.S. governments to share this recognition.

All three candidates for the ruling Liberal Democratic Party’s presidential election to choose Abe’s successor have been involved, to varying degrees and at different times, in dealing with the Henoko issue.

Chief Cabinet Secretary Yoshihide Suga has answered questions about the matter in his current capacity, while Fumio Kishida and Shigeru Ishiba have served as foreign minister and LDP secretary-general, respectively.

They should humbly acknowledge their failures in helping to untangle the morass over the Futenma relocation plan, offer their views about the troubled history of the Henoko project, and lay out clear visions for tackling the challenge.

Many questions have been raised not only about the government’s Henoko base plan but also about the approach it has adopted to push it through.

After Takeshi Onaga was elected Okinawa governor in 2014 on a campaign focused on opposition to the Henoko plan, the Abe administration started pruning the government’s budget to promote development in Okinawa that the local government can use mostly at its discretion.

At the same time, the administration set up a budget program that allows the government to provide funds directly to local municipalities and businesses in Okinawa, bypassing the prefectural administration. It was blatant money scheme to strong-arm local communities into playing ball with the central government over the issue and has created serious divisions within the prefecture.

The administration deployed hundreds of riot police from around the nation to crush protests against construction of new U.S. helipads in Okinawa’s Northern Training Area to replace those in the part of the area that was to be returned to Japan.

When about half of the training area was returned to Japan after the relocation of the helicopter landing platforms, Suga touted it as a major achievement. But it only means that U.S. military facilities in Okinawa Prefecture have been moved to other parts of the prefecture.

Prime ministers and senior LDP lawmakers in the past would spend much time and energy on deepening mutual understanding between Okinawa and the mainland by reflecting on the island’s history of suffering and exchanging views and opinions with local leaders.

Whoever becomes the next prime minister needs to restart this process to prevent the chasm between Okinawa and the mainland from widening further.

The carrot-and-stick approach will never solve the problem. That is the grim lesson to be gleaned from the Abe administration’s Henoko failure.