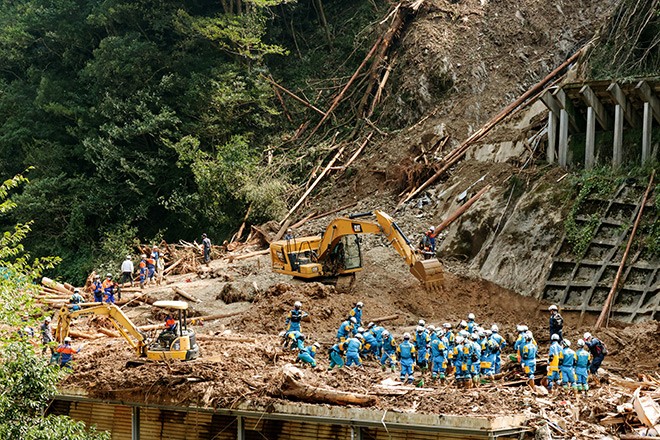 Rescue workers search for survivors in a landslide caused by Typhoon No. 10 in Shiiba village, Miyazaki Prefecture. (Minako Yoshimoto)

SHIIBA, Miyazaki Prefecture—Nguyen Huu Toan and Tran Cong Long not only brought much-needed labor to this village but also a sense of hope for the survival of the aging and depopulated community.

The two Vietnamese technical interns in their 20s also quickly gained the respect and admiration of the villagers.

The village is now praying for the rescue of Toan, Long and two others who have been missing since Typhoon No. 10 caused a landslide that buried the Aioigumi construction company office and a residential building shortly after 8 p.m. on Sept. 6.

Hideki Aioi, the company’s president, was rescued at the site. But his wife, Katsuko, in her 60s and his son, Yasutaka, in his 30s, also remain unaccounted for.

It was Aioi who brought Toan and Long to Shiiba village earlier this year. They were officially registered in May.

Aioigumi, a major company in Shiiba, has about 20 employees and often wins contracts for local public works projects.

However, it has become tougher and tougher for Aioi to secure young employees because many people leave the village after graduating from junior high school.

To keep his 45-year-old company going, Aioi decided to look outside for manpower. He began frequenting Vietnam about a year ago, hoping to bring in technical trainees to help revive the village’s construction business.

Several thousand foreign technical trainees are living in Miyazaki Prefecture, but Toan and Long were the first for Shiiba village.

When they arrived, Aioi showed them around and took them to the village government office and other places in the neighborhood.

They had both studied Japanese before coming to the village, and locals quickly noticed that they could engage in conversation in Japanese to some extent.

“They were so motivated that they made me want to root for them,” a resident said.

Toan and Long were staying in the company’s dormitory, located about 100 meters above the landslide site. But on the evening of Sept. 6, the two were not in the dormitory.

Aioi had feared that the typhoon would cause flooding of a narrow river near the dormitory, so he advised the interns to spend the night at the office building, a co-worker said.

A village official, who clearly remembers the day Aioi took the Vietnamese interns the government office for the first time, has been deeply distressed over the disaster.

“Things have just begun for them here,” the official said. “I am extremely shocked, and I pray that they will be found safe and sound.”

Tetsuya Nasu, a 53-year-old manager of a supermarket in the central part of the village, said Toan and Long often shop for groceries with their co-workers on weekends.

“They are very courteous,” Nasu said. “They tried to be part of the community by participating in a clean-up event with villagers and doing other things.”

Shigeto Kuroki, 62, who chairs a regional general contractors association that Aioigumi belongs to, said improvements have been made to the notoriously harsh working practices and conditions in the construction industry.

Still, the declining birthrate has hit the industry hard, and “businesses everywhere are troubled by a shortage of workers,” Kuroki said.

“And it is worse in underpopulated areas. Aioi has made a company-wide effort to train technical interns,” he added.

According to the labor ministry’s Miyazaki Labor Bureau, 3,546 foreign technical interns, including 1,854 from Vietnam, resided in the prefecture as of the end of October 2019.

The construction industry ranked third in terms of hiring technical interns, with 353 working at the time, followed by the manufacturing industry and agriculture industry.

The number of technical interns in Miyazaki Prefecture has increased by 26.6 percent, or 746, from the same period of the preceding year.

The technical intern program has been criticized as a hotbed for slave labor conditions. Many foreign trainees have fled dangerous workplaces.

But that has not been the case for Toan and Long in Shiiba.

“(Aioi) was eagerly taking care of them, and they really liked the president,” the village official said.

(This article was written by Hiroyuki Kikuchi and Aya Hamada.)