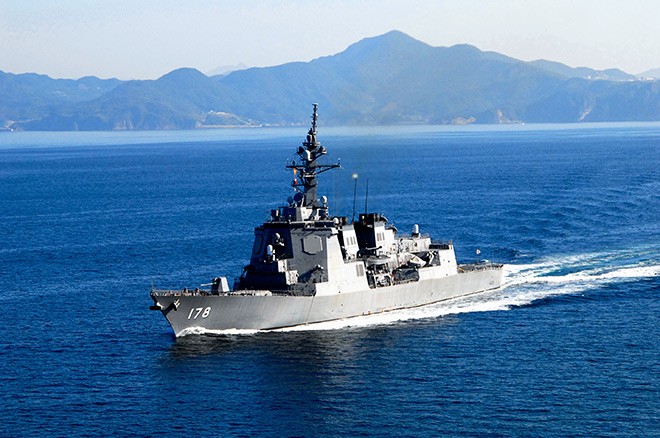 The Aegis destroyer Ashigara (Provided by the Maritime Self-Defense Force)

Japan is considering an offshore missile interception system to replace the land-based Aegis Ashore plan, but some defense officials have voiced opposition because a sea-based alternative may not provide around-the-clock protection, sources said.

The government has already concluded that it would be “impossible” to deploy the U.S.-made Aegis Ashore system to protect the nation against incoming missiles.

The Defense Ministry presented three options to the ruling Liberal Democratic Party: construction of a mega-float to host the missile detection and radar tracking system as well as a missile interception system; construction of additional Aegis destroyers; and deployment of the radar system on land and deployment of the missile launcher on a vessel.

The government is expected to choose an option by the end of this year.

According to the sources, the idea of constructing a vessel purely dedicated to missile defense has been floated within the government.

The government has already started discussions with the U.S. side on the feasibility of installing the Aegis Ashore system on a vessel.

One benefit of deploying such a vessel is that fewer crew members would be needed compared with the number aboard an Aegis destroyer.

The Defense Ministry had planned to set up the Aegis system at Self-Defense Forces facilities in Akita and Yamaguchi prefectures to protect the entire country from incoming projectiles.

But the plan was met with fierce opposition from residents around the candidate sites. The ministry’s explanations to the residents about the safety of the project proved unconvincing, its surveys were conducted in a slipshod manner, and it was hit with huge unforeseen costs.

As a result, the ministry in June announced the suspension of the process to introduce the Aegis Ashore system.

However, the suggested mega-float and additional Aegis destroyers have a drawback: their operations could be affected by bad weather.

Some in the ministry are concerned that the offshore systems may be unable to defend Japan “24 hours a day for 365 days,” the government’s goal for the deployment of the Aegis Ashore system.

There is also opposition to the offshore options because they would add to the burden of the Maritime Self-Defense Force, which already has a heavy workload and is suffering from low recruitment.

Prime Minister Shinzo Abe is expected to release a statement concerning new guidelines for Japan’s defense policy before he leaves office this month.

The statement will likely say the government should pick an alternative to the Aegis Ashore missile system by year-end and decide whether Japan should have the capability to pre-emptively strike an enemy’s missile and other bases.

The succeeding administration is expected to make a final decision over the options.