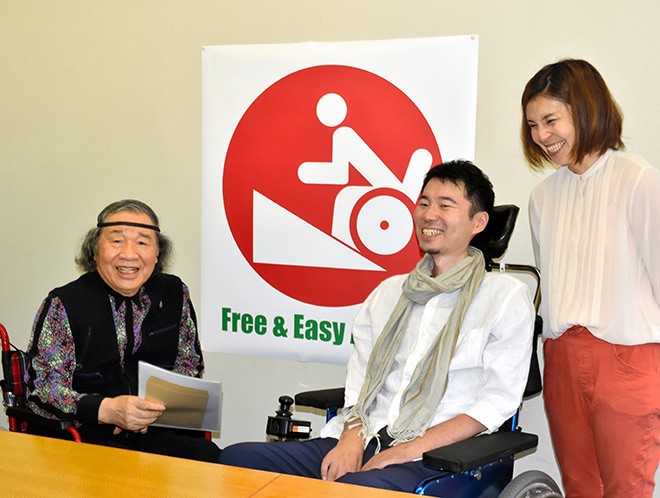 A “meishi” business card I received from a married couple was something I’d never come across before. It had the husband’s name printed on one side and the wife’s on the other.

Kotaro Miyasaka, 40, and his wife, Chitose, 44, together run Honkin, a small sake brewery in Suwa, Nagano Prefecture. Chitose never leaves her husband’s side because of his debilitating disease.

Miyasaka was 31 when he developed amyotrophic lateral sclerosis (ALS), a progressive degenerative disorder that causes loss of muscle control.

His chopsticks suddenly felt heavy, and he became unable to twist the lid off a jar.

Miyasaka was all ready and eager to produce the finest sake as the chief brewer of his family-owned brewery, which was founded in the mid-Edo Period (1603-1867).

But he was rebuked by a customer for “being drunk at work” at a sake exhibition event even though he was totally sober. He was devastated to realize he had started slurring his speech. It became too painful to face people.

He was saved, however, by Taiji Harada, 80, a wheelchair-bound artist living in Suwa.

Harada invited Miyasaka to join his campaign to promote barrier-free, wheelchair-accessible establishments in the community.

They made special stickers that said “rakuraku nyuten” (easy-peasy entry), which are affixed at stores equipped with wheelchair ramps, or those where staff are available to assist customers with disabilities.

Participating in the campaign opened up a new world.

“I get a sense of fulfillment from promoting it by talking to many people about my struggles and hopes,” Miyasaka said.

Collaborating partners have grown to 54 establishments, including not only restaurants and bars, but also hospitals, barbershops and credit unions.

Miyasaka offered me a sip of his sake. It tasted simple yet profound.

During the interview, he strained to force his words out to answer my questions, and his wife “interpreted.”

Observing their mutual devotion, I sincerely hope there will be many more places where they are able to enjoy dining out together.