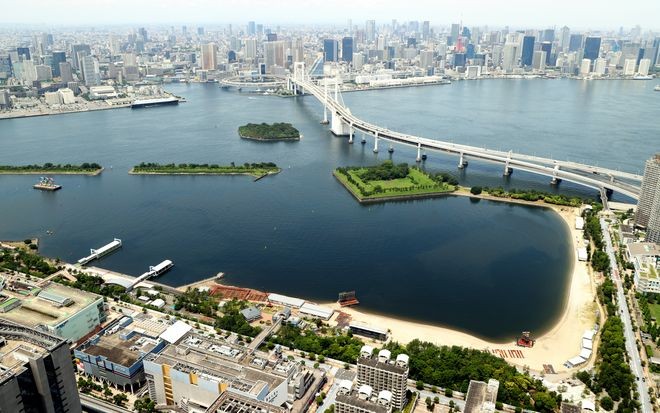 Odaiba Marine Park in Tokyo’s Minato Ward where the triathlon and other events are scheduled to be held during the 2020 Tokyo Olympic and Paralympic Games next year. (Asahi Shimbun file photo)

Tokyo Olympic organizers wanted to ensure that competitors who splash through the turbid waters of Tokyo Bay emerge as happy as clams.

So, they went to work to attract hundreds of thousands of mollusks to the bay, as a natural water-purifying element.

Clams are now breathing in the waters of Tokyo Bay off the Odaiba district, a venue for the triathlon and other events, part of an effort to enhance underwater visibility and improve water quality.

The odd campaign started following a series of complaints made by athletes who competed in pre-Olympic testing events held in the area in summer 2019.

“The bay water smells like a toilet,” some of the athletes who swam in the bay complained after the race.

Such a comment shocked officials of the Tokyo Organizing Committee of the Olympic and Paralympic Games and the Tokyo metropolitan government, who decided to turn to the shellfish for help.

Under “operation clams,” Tokyo officials began pouring a massive amount of sand into the waters off Odaiba to attract clams, which are believed to purify the water.

By early July this year, officials had poured 22,000 cubic meters of sand into the water. The material was scooped out during dredging work in the Izu Peninsula.

Officials said they have listened to experts’ opinions and will study how the clams have accumulated in the bay, hoping to see an expected improvement in water quality.

Mitsuharu Toba, a visiting professor at Tokyo University of Marine Science and Technology who studies clams, said what causes turbid marine water is plankton, which clams eat. The more plankton the clams consume in the waters off Odaiba, the more the water transparency is improved, he said.

However, it is unlikely that the organizers’ effort will become fully effective by the time of the Games, he said.

The number of clams spawning changes every year. In a closed-off section of Tokyo Bay, the amount of oxygen decreases in summer, causing a dysoxic environment where large numbers of clams and other creatures die.

The number of clams will less likely increase enough to purify the water as much as the organizers hope, he said.

Satetsu Takeda, a writer, has followed the development of the effort.

“It made me smile unwillingly, but we have to pay close attention to this million-dollar project, to see if it’s really worth the money,” he said.

Takeda said he cannot help but imagine how those clams would feel about their role.

“They must be surprised to assume a role that affects the fate of human affairs, not to mention a major global event,” he said.

Sports associations and others have set up multiple standards to decide the feasibility of holding a competition at the Tokyo Games. One such standard is water clarity.

Water temperature and the concentration of fecal coliform bacteria are also factors they weigh in deciding to cancel an event. But odor is not on the list.

The waters in Tokyo Bay can be high in temperature during summer. Organizers of the Games are planning to use a device to stir the water so that warm water near the surface and cooler water on the bottom of the sea are mixed and lower the overall water temperature.

They will also set up triple-layered screens underwater to stop fecal coliform bacteria from flowing into the competition area.

For more than 10 of 27 monitored days, fecal coliform levels exceeded a baseline established by the organizers in the competition area. But inside the screens, the number stayed below the baseline.

However, the water temperature in the morning and the level of water clarity did not make the grade even with the screens in place on some days, they said.

Fecal coliform bacteria and a foul odor in the water are also caused by the sewerage disposal system used in many of the capital’s 23 wards.

Human sewage including lavatory water, other types of filthy water and rainwater are all collected together into a sewage line.

After heavy rains, the sewage is discharged into rivers. The effects can be felt in the ocean for days afterward.

An official hopes for good weather throughout the Olympics and Paralympics, so that “neither the odor of the water nor the fecal coliform level will become an issue.”

Triathlon events for the Olympics are scheduled to be held in late July next year.

This year, Tokyo experienced many rainy days around the same time.

But if the official’s wish comes true next summer and the sun remains shining over the capital, the water temperature in Odaiba can rise and become too high to hold a competition.

It is not all about clams, after all.