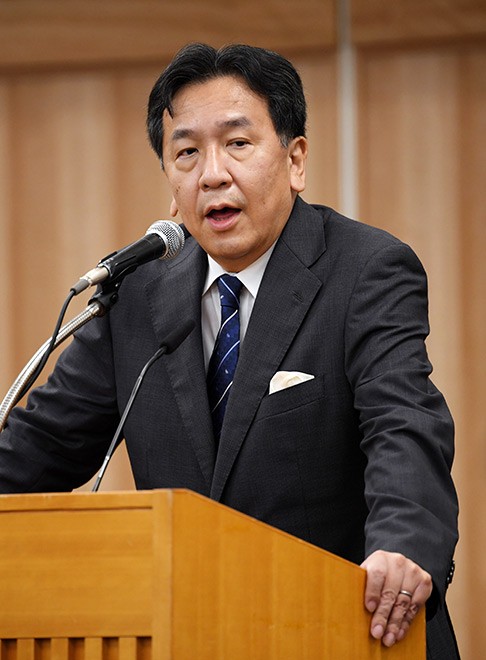 Yukio Edano speaks at a news conference in Tokyo on Sept. 10 after he was elected leader of the merged opposition party. (Shinnosuke Ito)

A new party has ended the fragmented opposition camp, which created a political landscape described as “one giant and a bunch of dwarfs,” and gained a foothold for challenging the powerful ruling coalition led by the Liberal Democratic Party.

With its leader and name chosen, the party, created through a merger between the Constitutional Democratic Party of Japan (CDP) and the Democratic Party for the People (DPP), needs to offer a clearly different alternative to the dominant alliance to win over voters.

The challenge requires determined efforts driven by the recognition that the party is facing a make-or-break political battle.

On Sept. 10, the party members elected CDP chief Yukio Edano as its leader and also decided to inherit the CDP name by vote. It will hold its inaugural party convention on Sept. 15.

The formation of the new opposition group coincides with the resignation of Prime Minister Shinzo Abe, who has been in power for seven years and eight months.

There is no denying that the weak opposition camp has undermined the Diet’s ability to act as an effective watchdog of the administrative branch and caused arrogance and erosion of discipline within the long-running Abe administration.

The merged opposition party will have an important role to play in the restoration of healthy tension in politics in Japan whoever becomes the next prime minister.

With both its name and leader unchanged from the old CDP, the new party does not strike voters as a really fresh political force. Cynical voters view it as nothing but the reunification of politicians who once belonged to the now-defunct Democratic Party (Minshinto) as they are faced with the prospect of an early Lower House election.

In response to this criticism, Edano, during his campaign for the party leadership election, stressed wide differences between the policy platforms of the new party and its predecessors.

The new party’s platform says it will try to “reduce (income) disparity through fair distribution without placing too much importance on self-responsibility.”

This indicates that the new party will not adopt the neoliberal policies embraced by the Democratic Party of Japan (Minshuto) and its successor party, the Minshinto.

The new party’s platform also includes other policy planks that contrast itself with the governing coalition of the LDP and its junior partner, Komeito, such as establishing gender equality, building a society without nuclear power generation and ensuring effective management of official documents and full information disclosure.

The challenge for the new party will be how to translate these principles into specific policy measures that appeal to voters. The only way it can silence the criticism that it is just old wine in an old bottle is by offering strong and concrete policy proposals.

The Minshuto unseated the long-ruling LDP from power in 2009 on the back of massive public support, but lost its grip on power in just three years and three months. Its fall into a political abyss is still fresh in the memories of Japanese voters.

Edano was at the core of the Minshuto government as he served as chief Cabinet secretary and economy minister.

The onus is now on Edano to use the lessons from the Minshuto debacle to convince the voting public that the new party deserves a mandate to govern.

Only Diet members were allowed to vote in the new party’s leadership election, with both card-carrying party members and local assembly members excluded. A party’s political power is supported by its local organizations and ordinary, inconspicuous activities based in local communities.

It is of urgent importance for the new party to solidify the foundation of its organization.

The current Lower House members have one year to go to the end of their four-year term. Rumors are circulating within the political community that the new prime minister will quickly dissolve the Lower House for a snap poll.

On Sept. 10, Edano pledged to make his party a viable alternative for voters.

The party leadership needs to act swiftly to ensure broad electoral cooperation among opposition parties including a new bloc to be created by DPP chief Yuichiro Tamaki, who has not joined the new grouping, and other lawmakers.

The new party should provide effective leadership for talks among opposition partners to select unified candidates and develop a common campaign platform.