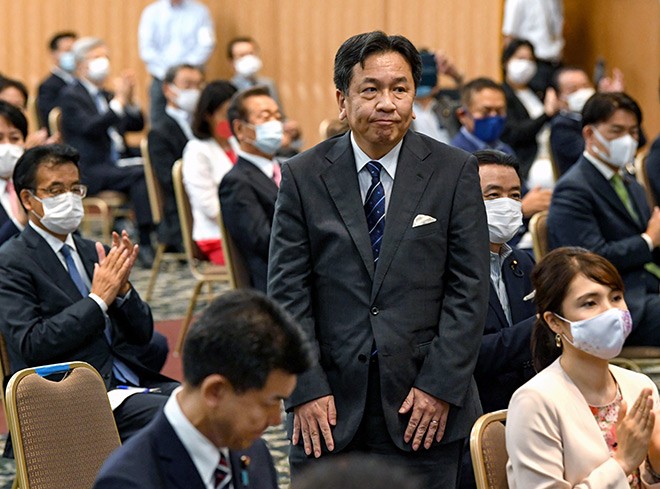 Yukio Edano acknowledges the applause of fellow lawmakers after he was elected leader of the newly merged Constitutional Democratic Party of Japan on Sept. 10. (Shinnosuke Ito)

The newly formed largest opposition party has elected the same leader, retained the same name and faces the same challenge of trying to regain the public’s trust to run the government.

Yukio Edano on Sept. 10 was elected president of the Constitutional Democratic Party of Japan (CDP), easily defeating Kenta Izumi, policy chief of the old Democratic Party for the People (DPP).

The merger between the CDP and the DPP to create the new party has largely been overshadowed by the resignation of Prime Minister Shinzo Abe and the ruling Liberal Democratic Party’s election to pick a new leader.

But the new CDP does have 149 Diet members, making it by far the largest opposition party, and it intends to quickly gain positive reviews.

“I will make every effort to turn our party into a viable alternative for taking over the government in the next Lower House election and have the public choose us,” Edano said after being elected to lead the merged party.

The former CDP struggled to gain ground on the ruling coalition over the past three years.

And Edano will also have to erase the public’s image of the bickering and ineffectual Democratic Party of Japan that fell from power in 2012, paving the way for Abe’s second stint as prime minister and seven years and nine months of LDP domination.

The newly merged party is in many ways a regathering of various elements of the DPJ that finally broke up three years ago.

Edano proposed CDP as the name of the new party, which received 94 votes from lawmakers. The Democratic Party, suggested by Izumi, gained 54 votes.

The new CDP will also need cooperation from other opposition parties to prepare for the next Lower House election.

Twenty-two members of the former DPP decided not to join the new opposition force. The new party only has about 200 candidates lined up for the 289 single-seat districts of the Lower House.

The new CDP will also have to change its tactics.

Opposition lawmakers have spent much of the past seven years criticizing Abe’s policies, including his efforts to revise the pacifist Constitution and to reinterpret it to allow for limited exercise of the right to collective self-defense.

But with Chief Cabinet Secretary Yoshihide Suga comfortably leading in the LDP’s presidential election scheduled for Sept. 14, the CDP may have to shift its focus because Suga is not as ideological as Abe.

(Ryuichi Yamashita contributed to this article.)